TODAY, 1:25pm: Mulder's deal includes no guaranteed money, tweets Jeff Fletcher of the Orange County Register. He will have to make the opening day roster to guarantee his $1MM base, and must stay active and in the rotation for the full season to reach the $6MM in incentives, according to Fletcher.

YESTERDAY, 6:36pm: Mark Mulder has agreed to a minor league deal with a big league invite with the Angels, according to Jerry Crasnick of ESPN.com (on Twitter).  The veteran, who is represented by Brian Charles of Big League Management Company, LLC, can earn more than $6MM if all incentives are met, Ken Rosenthal of FOX Sports tweets.  The deal comes with a guaranteed $1MM base salary, tweets Nick Cafardo of the Boston Globe. 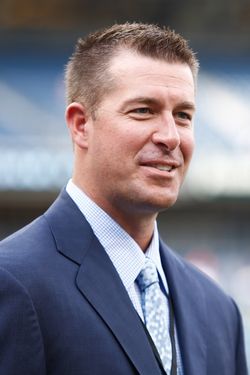 Mulder, 36, hasn't pitched since 2008 because of shoulder issues, and has been working as an analyst with ESPN since 2011.  Mulder began his comeback in Arizona in November and auditioned for the Giants, Diamondbacks, and numerous other clubs before reaching agreement with the Halos.  In nine seasons with the Athletics and Cardinals, Mulder owns a 4.18 ERA with 5.7 K/9 and 2.8 BB/9.

The veteran will get an opportunity to compete for a starting job while also training near his home in the Phoenix area, tweets Crasnick.  The Halos have Jered Weaver and C.J. Wilson atop the rotation, with Joe Blanton, Garrett Richards, and lefties Tyler Skaggs and Hector Santiago also in the rotation mix.  The agreement with Mulder shouldn't preclude them in their pursuit of Japanese ace Masahiro Tanaka or Matt Garza.  The baseball world will be rooting for Mulder, who last pitched in '08 and hasn't spent a full season as a starter since '05.

While it's a minor league deal, Mulder's agent won't commit to the left-hander actually pitching in the minors. "Mark will evaluate that if and when the time comes," Charles told Jeff Fletcher of the Orange County Register (via Twitter).

Photo courtesy of USA Today Sports Images.  Nick Cafardo of the Boston Globe first reported that Mulder was nearing agreement with the Angels.