DECEMBER 13th: The Rays have reached an agreement with James Loney on a three-year, $21MM contract, according to Ken Rosenthal of FOX Sports (on Twitter). The deal is pending a physical. ESPN's Buster Olney was the first to report that the Rays were on the verge of an agreement with the Legacy Agency client (also on Twitter). Jon Heyman of CBS Sports tweets that $5MM of that guarantee will come as a signing bonus. 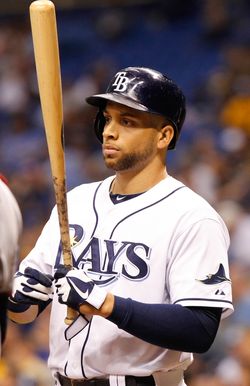 Loney's guarantee is slightly less than the three-year, $27-30MM contract he was recently rumored to be seeking. The 29-year-old still obtains a tremendous raise from last year's $2MM salary. The raise is well-deserved, as Loney is fresh off a rebound campaign in which he batted .299/.348/.430 with the Rays. He posted the strong defensive marks that have come to be expected of him, registering a 7.2 UZR/150 and +4 Defensive Runs Saved.

Loney will re-join a lineup that features franchise cornerstone Evan Longoria, 2013 AL Rookie of the Year Wil Myers and the underrated Ben Zobrist. He doesn't have the prototypical power one would expect from a first baseman, but he has strong on-base and defensive skills, similar to recently acquired backstop Ryan Hanigan.

Loney was one of many first base options for the Rays to consider; Corey Hart and Justin Morneau have each signed affordable contracts in the past week or so, and Seattle acquired Logan Morrison from the Marlins in exchange for reliever Carter Capps. The trade market still presents options such as Ike Davis, Mitch Moreland and perhaps Justin Smoak.

However, signing Loney has long been a priority of the Rays, based on comments from exeuctive vice president and general manager Andrew Friedman made to Marc Topkin of the Tampa Bay Times earlier this month: "The good thing for us is he liked it here. We liked him, he fit in well. And we're a known quantity … I'm hopeful that he can be here."