11:29am: Hanrahan’s base salary is $1MM, and he can earn up to $3MM total after incentives, reports USA Today’s Bob Nightengale (on Twitter).

11:10am: Acknowledging a need for bullpen help, the Tigers announced today that they’ve signed right-hander Joel Hanrahan to a one-year, incentive-laden Major League contract. Hanrahan will begin the season on the disabled list and build up arm strength in the minors before joining the big league club, according to GM Dave Dombrowski. Detroit was one of five teams recently reported to have “strong” interest in the Reynolds Sports Management client. 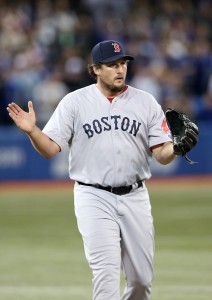 The 32-year-old Hanrahan is two weeks shy of the one-year anniversary of the Tommy John/flexor mass repair surgery that cost him the majority of the 2013 campaign. Roughly two weeks ago, Hanrahan impressed at a showcase for interested teams that saw upwards of 20 Major League clubs attend. Reports from the showcase said he looked to be in good physical condition and was throwing as hard as 93 mph despite being just 11 months removed from surgery.

Detroit’s bullpen took a hit before the season even began, when it was learned that fireballing setup man Bruce Rondon would require Tommy John surgery and miss the 2014 season. That loss and a lack of quality internal options has led the Tigers to a collective 5.37 ERA from their relievers thus far in 2014 — second-worst in the Majors. When he is healthy enough to take the field, Hanrahan will presumably slide into a setup role alongside Joba Chamberlain, Al Alburquerque and Ian Krol to help bridge the gap to closer Joe Nathan.

ESPN’s Jerry Crasnick was the first to connect Hanrahan to a press conference that the Tigers had scheduled (on Twitter). Jon Heyman of CBS Sports first reported the agreement (Twitter link), and Chris Cotillo of MLB Daily Dish added that it’s a Major League deal (Twitter link).