12:02pm: The Braves have suddenly become Major League Baseball’s most active team on the extension front, and they continued their rash of long-term deals on Friday by officially announcing a three-year deal for third baseman Chris Johnson. The contract will buy out two arbitration years and one free agent season, and the Braves hold a club option on a fourth year. Johnson, 29, is represented by Excel Sports Management. 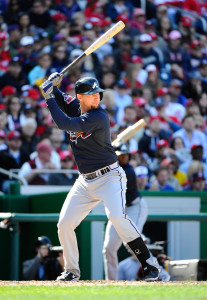 Johnson, a fourth-round draft pick of the Astros in 2006, was dealt to the Diamondbacks near the 2012 trade deadline.  He later joined the Braves in January 2013 along with Justin Upton, with Arizona receiving Martin Prado, Randall Delgado, Zeke Spruill, Nick Ahmed, and Brandon Drury.  So far Johnson has compiled a .307/.344/.438 batting line in 643 plate appearances spanning 167 games for Atlanta.  He was worth 2.8 wins above replacement last season, according to FanGraphs.

Johnson had three years and 144 days of Major League service prior to this season,  so he’s already been arbitration eligible twice (the first time as a Super Two player).  Johnson is earning $4.75MM this year, and the Braves previously had him under team control through 2016.

MLBTR was the first to report that the two sides were finalizing an extension. Ken Rosenthal of FOX Sports reported (via Twitter) that it was a three-year deal with a club option.