2:12pm: The A’s are paying $650K of Cespedes’ salary but are getting back $1.8MM from the Red Sox for Lester’s salary, tweets Susan Slusser of the San Francisco Chronicle.

11:35am: The teams have announced the trade. Nightengale tweets the exact figure that will be heading to Oakland: $650K.

10:09am: Dave Cameron of Fangraphs reports another wrinkle in the trade: Cespedes’ contract calls for him to be non-tendered at the end of his deal (if he is not first extended) in order to assure him early free agency, and he therefore is ineligible to receive a qualifying offer following the 2015 season (Twitter links).

9:14am: The Red Sox are sending under $1MM to the A’s in the trade, tweets Bob Nightengale of USA Today. Meanwhile, J.J. Cooper of Baseball America tweets that the value of the Competitive Balance pick that Boston receives will be roughly $800K.

8:54am: Passan tweets that Oakland is also sending a competitive balance draft pick to the Red Sox in the trade, and Boston is sending cash to Oakland. The A’s landed the second pick in Comp Round B in last week’s lottery.

8:49am: The Athletics have acquired Jon Lester and Jonny Gomes from the Red Sox in exchange for outfielder Yoenis Cespedes, according to Alex Speier of WEEI.com (Twitter links). Jeff Passan of Yahoo Sports first reported that Lester had been traded to an unknown club, while Gordon Edes of ESPNBoston.com first connected the A’s and Lester earlier this week. 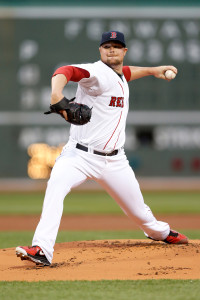 The addition of Lester will give Oakland an incredibly formidable rotation for the balance of the regular season, but perhaps more importantly, in the playoffs. Lester, who has posted a 2.52 ERA with 9.4 K/9, 2.0 BB/9 and a 43.2 percent ground-ball rate, will join fellow trade acquisition Jeff Samardzija, free agent signing Scott Kazmir and homegrown star Sonny Gray atop Oakland’s rotation.

It’s possible that the struggles of Jason Hammel, acquired from the Cubs along with Samardzija back on July 4, prompted A’s GM Billy Beane to aggressively pursue another sizable rotation upgrade. While the loss of Cespedes will hurt Oakland’s lineup, the team can afford to part with some offense; the A’s rank first in the Majors in runs scored, sixth in on-base percentage and eighth in slugging percentage. Gomes won’t replace Cespedes’ power or his .256/.303/.464 batting line, but he’s a formidable opponent against lefties, having slashed .302/.400/.431 against southpaws in 2014 and .279/.379/.495 in his career.

Cespedes will bring the Red Sox a much-needed outfield bat, though he’s only under team control through the 2015 season due to a clause in his contract that allows him to forgo arbitration and hit the free agent market after his initial four-year term. He’s slated to earn $10.5MM next season — the same sum that he is owed in 2014. John Shea of the San Francisco Chronicle tweets that Cespedes recently voiced a disinterest in playing center field with the A’s, but he did so through a teammate rather than by approaching manager Bob Melvin directly, which likely didn’t sit well with the team (Twitter links). 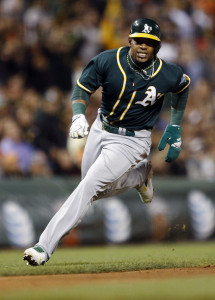 The pair of blockbuster trades by Beane signifies a clear “all-in” philosophy on the 2014 season. Oakland has traded its best prospect (Addison Russell), a 2013 first-round pick (Billy McKinney) and one of its most dangerous bats (Cespedes) in an attempt at the most dominant pitching staff it can muster for the playoffs. There will be no compensation if (or, perhaps more appropriately given his likely price tag — when) Lester departs as a free agent, as baseball’s collective bargaining agreement prohibits players who did not spend the entire regular season on one team from receiving qualifying offers.

For the Red Sox, who hope to re-sign Lester as a free agent this offseason, this trade at least gives them a chance, perhaps a slight one, to have Lester and Cespedes on the same team in 2015 when the club takes another shot at contending. Beyond that, the addition of a draft pick is an interesting wrinkle, as it allows Boston to enjoy the best of both worlds, in a way. GM Ben Cherington could have kept Lester and extended a qualifying offer in hopes of recouping a draft pick if Lester signed elsewhere in free agency. Now, the Sox will get a bonus pick regardless (albeit a slightly later one), and they also are guaranteed a middle-of-the-order bat for the 2015 season. It wouldn’t be surprising to see Boston engage Cespedes in extension talks either, though that is nothing more than my own speculation at this juncture.