The Mariners have acquired Chris Denorfia from the Padres in exchange for outfielder Abraham Almonte and minor league right-hander Stephen Kohlscheen, the teams announced. 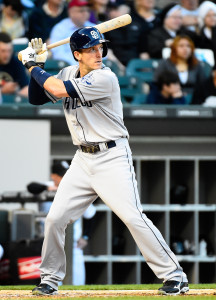 Denorfia, 34, is hitting just .242/.293/.319 this season, but he’s a proven weapon against left-handed pitching — a clear point of weakness for Seattle. While he hasn’t hit lefties or righties in 2014, Denorfia is a lifetime .301/.367/.447 hitter against southpaws. He’s also a plus defender at either corner outfield spot and can handle center in a pinch, though defensive metrics don’t like his work there.

The Mariners have hit just .244/.298/.371 against left-handed pitching this season, and their outfielders have been even worse against southpaws, hitting a combined .246/.287/.346. Denorfia is a free agent at season’s end.

Almonte, 24, opened the season as Seattle’s leadoff hitter and everyday center fielder, but he struggled offensively, hitting just .198/.248/.292 in 113 plate appearances before being sent down. He’s been markedly better at Triple-A Tacoma, slashing .267/.333/.390 with six homers and seven stolen bases on the season. Baseball America ranked him as Seattle’s No. 17 prospect heading into the season.