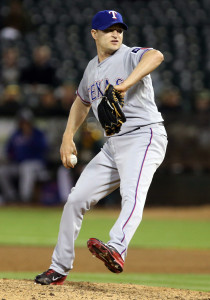 The 36-year-old Frasor is in the midst of a strong season with the Rangers, having pitched to a 3.34 ERA with 9.1 K/9, 4.3 BB/9 and a 47.6 percent ground-ball rate in 29 2/3 innings. That continues a trend of relatively strong performance for Frasor, who has notched an ERA of 3.68 or better in five of the past six seasons.

Frasor is an affordable add for GM Dayton Moore, from a financial standpoint, as he’s owed just $1.75MM in 2014, which translates to roughly $717K for the rest of the season. He will be a free agent at season’s end, so this acquisition is strictly a rental for the Royals.

Bullpen help may not seem to be the Royals’ largest needs — many would instead cite right field — but the team’s 3.62 ERA from its relievers ranks 16th in the Majors. Additionally, they’ve been a top-heavy unit as a group. While Greg Holland, Wade Davis and Kelvin Herrera have been excellent, Kansas City has also relied heavily on the likes of Michael Mariot (6.48 ERA in 25 innings) and Louis Coleman (7.48 ERA in 21 2/3 innings). Additionally, there has to be some concern over Aaron Crow, who has seen his velocity dip nearly three miles per hour and his K/9 rate dip to 4.8.