The Tigers have agreed to a minor league deal with righty Jim Johnson, Ken Rosenthal of FOX Sports reports on Twitter. The longtime Orioles closer lost his 9th-inning gig not long after joining the Athletics this year, and was ultimately released by Oakland. 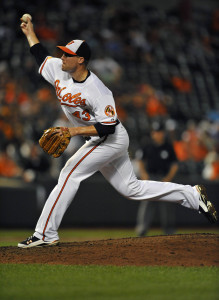 It’s obviously a low-risk move for Detroit, which has dedicated plenty of attention to shoring up the pen. Johnson can audition and provide depth in the minors, while of course also providing that always elusive late-inning experience if the need arises down the stretch.

Johnson has never been an outright dominant reliever in the sense of maintaining high strikeout rates or wielding unhittable stuff, but he certainly has a history of effectiveness. Still only 31, Johnson racked up three straight seasons of sub-3.00 ERA ball in Baltimore over 2011-13 before hitting a wall with the A’s. Though he continued to induce tons of ground balls with his heavy sinker, Johnson became highly susceptible to the long ball (17.2% HR/FB rate) and suddenly lost his usually solid control (5.13 BB/9).

Johnson had recently worked out for the Orioles, which seemed a natural fit — except for the fact that the big league bullpen really did not have an opening. Roch Kubatko of MASNsports.com tweeted last night that Johnson had chosen to sign elsewhere. After taking on his $10MM salary by trade before the year, the A’s will still be responsible for the balance, less only the league minimum rate (for whatever stretch Johnson ends up spending in Detroit).