Over the winter, MLBTR’s Charlie Wilmoth took a look at the changing closer market, documenting the dwindling dollars and years available for 9th-inning relievers. As we approach now approach a new offseason, a different type of market change — related only in part to the broader trend — has taken hold. Namely, the actual group of soon-to-be free agents with closing experience has seen many individual stock drops. 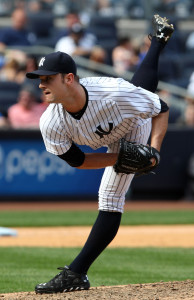 Let’s have a look at the “closer” portion of MLBTR’s 2015 MLB free agent list (including only those players who, in my opinion, are likely to become free agents): Jason Grilli, Casey Janssen, David Robertson, Francisco Rodriguez, Sergio Romo, Rafael Soriano, and Koji Uehara. Listed under right-handed relievers are a few other names with significant closing experience: Heath Bell, Jim Johnson, J.J. Putz, and Jose Veras.

Heading into the year, this looked like a pretty strong group of late-inning arms. Among them were some of the more established closers — and, indeed, better relief pitchers, role aside — in the game. But the group has seen some pretty significant shifts in value that make it look much less impactful on the whole.

Here are my assessments of the value movement on these players:

Grilli: coming off 2.70 ERA, 33-save year, lost Pirates closer job and was traded to Angels; has performed well since in set-up role

Romo: after four-straight lights out years, was relieved of end-of-game duties and owns 3.98 ERA on season

Bell, Johnson, Putz, Veras: look, there’s a reason that these guys fell off of the (admittedly subjective) “closer” list, which is that they all struggled mightily for lengthy stretches

Robertson: on the one hand, Robertson has proven that he can handle closing in New York after taking over for a legend; on the other, his peripherals are in line with his career numbers but his ERA (2.92) is higher than in recent years

Soriano: there’s an argument to be made that he has raised his stock with his strikeouts back on the rise, but an offsetting jump in free passes has kept his K:BB ratio the same, and on the whole he has not done much to change the fact that he is a good-but-not-great reliever

So what does this all mean? It seems to me that the major beneficiary of the market shake-out is Robertson, who is by far the youngest of these closers and is the only one who (as things stand) will enter free agency with both an impeccable recent track record and few real questions moving forward. Though Uehara has the most dominant recent record of this group, his well-documented recent struggles and advanced age should significantly dampen his market.

Those dynamics put the Yankees in an interesting spot. On the one hand, the club should now face greater competition to bring back its Mariano Rivera replacement. On the other, it might justifiably utilize the qualifying offer to buy back some leverage. The team has already shown a willingness to do just that with a closer (Soriano), and would up the ante for other teams that might consider a run at Robertson.

The possibility that Robertson’s market will itself be suppressed by a QO paints an even more sobering picture of the overall expectations. It is worth wondering whether any of the other above-listed players will be able to command a significant, multi-year guarantee. The one player who is clearly rising, Rodriguez, could certainly land a reasonable salary over two years (he is, somehow, still only 32), but it is hard to see a bidding war emerging there. No doubt some of the others will take smaller average annual values to get a second year, but pillow contracts could abound.

Remember, last year’s upper-middle closer market settled in the range of two years and between $9.5MM and $15.5MM. And that was for pitchers like Edward Mujica, Grant Balfour, Fernando Rodney, and Joaquin Benoit who had much stronger cases than this year’s crop. Notably, even those pitchers were not able to beat the earnings of high-performing non-closers. And, if anything, the high-profile struggles of players like Balfour and Johnson have further eroded the notion of paying big dollars for relievers whose primary calling card is 9th-inning experience.

This year’s market could have looked similar: a few strong performances from familiar players, a few emerging/rebounding names. Instead, we’ve seen mostly steps in the wrong direction from pitchers with closing time on their resume. And that is even before considering demand. Many of the clubs that could have open closing positions — for instance, the Orioles, White Sox, Rangers, Nationals, Brewers, Cubs, Giants, and Rockies — seem more likely to stick with veterans, elevate internal options, or avoid spending big dollars on an older reliever.

Now may be a good time to find out whether teams will place any significant premium at all on that experience going forward.