12:07pm: The Braves announced that they have signed former Orioles closer Jim Johnson to a one-year, Major League contract (Twitter link). The right-hander is a client of Moye Sports Associates. 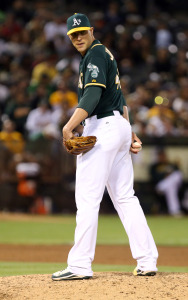 Johnson, 31, is just a season removed from back-to-back campaigns of 50-plus saves — each of which led the American League. His 101 saves from 2012-13 bloated his arbitration payday to $10MM last year, however, which was enough for the Orioles to trade him to the A’s in what was more or less a salary dump, despite the fact that he had continued to post solid numbers.

To say that Johnson’s Oakland tenure didn’t go as planned would be an understatement. The 2012 All-Star lost his closing gig to Sean Doolittle early in the 2014 season and never appeared comfortable in green and gold. He posted a 7.14 ERA with 6.3 K/9, 5.1 BB/9 and a typically strong ground-ball rate of 56.8 percent. After being designated for assignment and ultimately released, Johnson latched on with the Tigers but didn’t fare much better, allowing 10 runs in 13 innings with a 14-to-12 K/BB ratio.

It’s fair to say that Johnson was never the elite reliever that one might expect by glancing solely at his saves totals. Even in his peak seasons from 2011-13, he posted a 2.70 ERA but with a sub-par 6.1 K/9 rate. However, that’s certainly not to say that Johnson isn’t a quality relief arm. If last year’s control problems are corrected, Johnson figures to be an excellent rebound candidate to replace Jordan Walden (traded to the Cardinals along with Jason Heyward) in a setup role for Craig Kimbrel. Johnson’s never posted a ground-ball rate lower than 51 percent, and that mark has been 58 percent or better in each of the past four seasons. Johnson’s sinker continued to induce grounders last season and there was no drop-off in its velocity (average 93.6 mph), so the Braves presumably have a nice buy-low candidate to add to a bullpen that features Kimbrel, Shae Simmons, James Russell and David Carpenter, among others.