The Athletics will sign outfielder Cody Ross once he officially clears release waivers tomorrow, reports Ken Rosenthal of FOX Sports (on Twitter). Oakland will be responsible for the pro-rated portion of the league minimum in terms of Ross’ salary, while the D-Backs, who released him this weekend, will be on the hook for the remainder of his $8.5MM salary and $1MM option buyout. 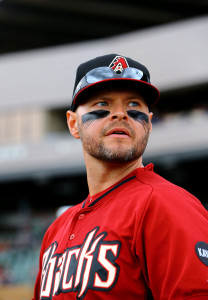 Last night, Susan Slusser of the San Francisco Chronicle reported that the A’s were on the hunt for veteran outfielders in the wake of surgery that will sideline Coco Crisp for up to two months, and Oakland clearly acted quickly upon that interest, reaching an agreement with Ross’ agents at Relativity Baseball.

Ross, 34, signed a three-year, $26MM contract with the D-Backs in the 2012-13 offseason that proved to be a bust, due largely to injuries. A .267/.326/.481 batting line and 22 homers with the 2012 Red Sox earned him that sizable deal, but Ross batted just .268/.322/.378 in 177 games (570 plate appearances) over the past two years in Arizona. Calf injuries and hip surgery limited his ability to stay on the field, and the presence of A.J. Pollock, David Peralta, Ender Inciarte, Mark Trumbo and Yasmany Tomas in the D-Backs organization left Ross without a spot on the roster.

Oakland figures to deploy Ross primarily in left field, as a platoon of Craig Gentry and Sam Fuld will handle center field, and Josh Reddick will be the primary right fielder once he is activated from the disabled list. Speedster Billy Burns and Rule 5 pick Mark Canha seem to be the likeliest candidates to be squeezed out of playing time, but the A’s regularly rotate a mix of players throughout various positions on the diamond, with many players serving in more of a part-time role than in true full-time capacities.

Ross is particularly effective against left-handed pitching, having authored a .294/.360/.557 batting line when holding the platoon advantage over the duration of his 11-year Major League career. From a defensive standpoint, he’s experienced at all three positions, but he hasn’t seen significant time in center field since 2010. He’s graded out as a plus corner outfielder in his career, per Defensive Runs Saved and Ultimate Zone Rating, though his marks in the eyes of those metrics have been skewed by the aforementioned injuries to his lower half in recent years.