The Braves have acquired right-hander Trevor Cahill and cash considerations from the Diamondbacks in exchange for minor league outfielder Josh Elander.  Both teams have officially announced the trade.  The D’Backs will send roughly $6.5MM to Atlanta to help cover Cahill’s $12MM salary for 2015, MLB.com’s Steve Gilbert reports (Twitter link).

Cahill brings the Braves some veteran stability to the pitching staff, as the righty looks to slot into the fourth rotation spot behind Julio Teheran, Alex Wood and Shelby Miller.  Eric Stults, Wandy Rodriguez and Mike Foltynewicz are in competition for the fifth spot, as the club was reportedly concerned about the possibility of using southpaws Stults and Rodriguez in consecutive order at the back of the rotation.  Mike Minor is expected to eventually be the fifth starter, though he’ll begin the season on the DL with shoulder problems. 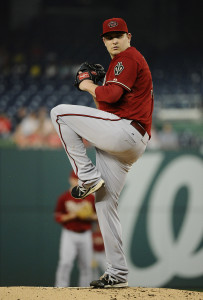 Prior to last year and an injury-plagued 2013, Cahill emerged on the scene as a promising young arm, averaging a 3.87 ERA and 196 innings per season from 2009-12 with the A’s and D’Backs.  He also has a career 54.6% ground ball rate, so Cahill will undoubtedly be thrilled to have Andrelton Simmons behind him in the infield.

Between trading Cahill and Miguel Montero this offseason, the Diamondbacks have cleared $45.5MM of future commitments off their books, including $17.5MM for 2015 alone.  That’s not a bad figure for a semi-rebuilding club, as it also opens up a spot in the rotation for top prospect Archie Bradley (as per Nick Piecoro of the Arizona Republic), who has been impressive this spring.

Elander, 24, was Atlanta’s sixth-round pick in the 2012 amateur draft.  The TCU product has a .275/.356/.435 slash line and 21 homers over 870 minor league plate appearances, none above the high-A level.  The 2014 Baseball America Prospect Handbook ranked Elander as the 13th-best prospect in the Braves’ system prior to last season, praising his solid adjustment from catcher to the outfield and noting his “quick hands, and a compact right-handed with good bat speed.”  An injury-plagued 2014 season, however, dropped Elander’s prospect stock.

Nick Piecoro was first reported that the trade was official, also reporting earlier today that the D’Backs were shopping Cahill, the Braves’ interest and that Elander was involved.  USA Today’s Bob Nightengale reported earlier tonight that a trade was “on the verge” of happening, while MLB.com’s Mark Bowman noted that the Braves still needed to review Cahill’s medicals before making anything official.