The Royals have officially acquired Athletics utilityman Ben Zobrist, as first reported by Ken Rosenthal of FOX Sports (via Twitter). Young hurlers Aaron Brooks and Sean Manaea are the two pieces heading back to the A’s, as Jon Heyman of CBSSports.com (via Twitter) and Jerry Crasnick of ESPN.com (Twitter link) were first to report. Kansas City will also pick up over $2MM, which covers a large piece of Zobrist’s remaining salary, Jeff Passan of Yahoo Sports tweets. 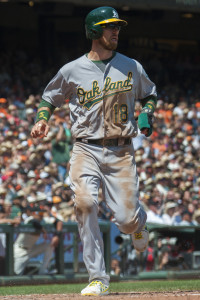 The deal delivers the second major rental piece heading to Kansas City this summer, as the club already picked up Johnny Cueto from the Reds. After dealing a trio of young arms to get Cueto, and now agreeing to send out two more to add Zobrist, Kansas City is firmly committed to winning this year. The club surprised the baseball world with its World Series run last year, narrowly missing out on a championship, and obviously decided that the time to win was the present after a strong first half in 2015.

In Zobrist, the Royals have added a uniquely valuable asset who can help the team in several ways. Star outfielder Alex Gordon is still working back from a significant groin strain, creating a need in left field. And the club has received less-than-sterling results from Omar Infante at second. Presumably, Zobrist will move between those positions — as he has for much of his career — depending upon needs and matchups.

Zobrist was perhaps the most hotly pursued player in the league this year, as he looked to be a strong fit for multiple contenders and is only owed the balance of a $7.5MM salary this season. At 34 years of age and set to hit the market after the season, he’s a pure win-now rental.

Despite playing half of his game’s in Oakland’s cavernous ballpark, Zobrist has increased his power output after a down 2014 in that department. He’s also rebounded nicely after getting out of the gate slowly and dealing with injuries. All told, Zobrist owns a .268/.354/.447 slash over 271 turns at bat on the year, with six home runs. Those figures land right at his career mark of .264/.354/.430, so Kansas City will feel comfortable that they are still likely to receive typically strong work at the plate.

There are some additional concerns on the defensive side of the ledger, however. Zobrist has shuttled between the corner outfield and infield this year, as usual, but has been rated as a negative contributor in both positions by advanced metrics. But the Royals will surely feel comfortable utilizing him in either role the rest of the way, based upon his past record as a highly-regarded fielder.

Kansas City has certainly paid a considerable price to add Zobrist, after doing the same to bring in Cueto. Manaea came into the year rated the club’s third overall prospect by Baseball America, just behind the since-dealt Brandon Finnegan, and landed on many top-100 lists. He’s generally shown well since his draft position fell owing to a hip injury, leading to surgery, which allowed K.C. to grab him with an above-slot deal. Manaea earned a promotion to Double-A this season, but has struggled in two outings at that level. All said, he’s missed some time and thrown 31 2/3 total minor league frames on the year, posting a 3.69 ERA with 11.1 K/9 against 3.1 BB/9. There’s plenty of upside to dream on, but he’ll have a lot to show in Oakland.

Brooks, meanwhile, is a 25-year-old righty who has seen brief MLB action in each of the last two seasons. He’s spent most of his time in those campaigns at Triple-A, however, posting a cumulative 3.81 ERA with 6.9 K/9 against 1.7 BB/9 over 245 2/3 innings. Brooks seems like more of a depth add than the more variable, headlining Manaea.