The Blue Jays have officially acquired righty Jesse Chavez from the Athletics. Right-hander Liam Hendriks is going to Oakland in return. 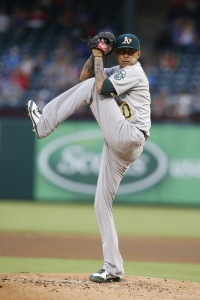 This swap could have wide-ranging implications. The 32-year-old Chavez figures to join the re-signed Marco Estrada in the Jays rotation, significantly reducing the team’s need to add a free agent starter. While neither figures to be a top-of-the-rotation contributor, that duo should provide innings, depth, and options. Of course, a bigger addition could still occur.

Chavez was something of a journeyman before he landed in Oakland. Over four seasons there, he worked to a 3.98 ERA with 8.2 K/9 against 2.9 BB/9 in 363 2/3 innings. He proved especially useful for his versatility, making 47 starts and 54 appearances from the pen after working almost exclusively as a reliever earlier in his MLB career.

MLBTR projects that Chavez will earn $4.7MM this year in his final season of arbitration eligibility. That’s obviously quite a bit cheaper than one would expect to pay for an arm of his quality on the open market, but he does come with just one season of control.

Meanwhile, the A’s will get four years of control over Hendriks, the first of which (2016) will be at league minimum. The 26-year-old enjoyed a breakout 2015 in the Toronto pen after functioning mostly as a starter earlier in his career — the opposite transformation of that enjoyed by Chavez.

The Aussie ended the season with 64 2/3 innings of 2.92 ERA pitching. Most impressively, he racked up 9.9 K/9 against just 1.5 BB/9 — figures that he never approached in prior seasons. As Chris Mosch of Baseball Prospectus explained in detail earlier today, a huge leap in fastball velocity and tweaking of pitch selection seemed to drive Hendriks’ success. His new team will now hope that he can continue that high level of performance and take up a key set-up role.