The Phillies have announced that they’ve acquired starting pitcher Jeremy Hellickson from the Diamondbacks, with 20-year-old righty Sam McWilliams heading to Arizona. The 28-year-old Hellickson is projected to make $6.6MM in 2016 in his final season before free agency, and he will presumably help fill out the rotation for a rebuilding Phillies team. 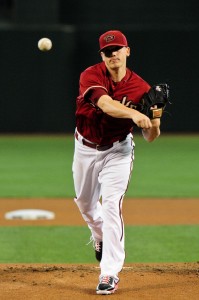 As MLBTR’s Jeff Todd noted in his Offseason Outlook post on the Phillies, the team can use a bit more certainty in their rotation behind Aaron Nola and Jerad Eickhoff. Hellickson could help provide it. Following his Rookie of the Year award with the Rays in 2011 and a solid follow-up campaign in 2012, the 28-year-old Hellickson has essentially been a back-of-the-rotation starter, fighting through injury issues along the way. After heading from Tampa to Arizona in a trade last offseason (a year ago today, in fact, as Marc Topkin of the Tampa Bay Times points out), Hellickson pitched 146 innings, posting a 4.62 ERA, 7.5 K/9 and 2.7 BB/9 in 2015 while missing a bit of time due to a hamstring issue. Still, the Phillies likely feel he’s capable of eating innings, and if he can regain a bit of his early-career magic, they could conceivably deal him to a contender this summer.

McWilliams, an eighth-round pick out of a Tennessee high school in 2014, spent his second consecutive season with the Phillies’ Gulf Coast League affiliate in 2015, where he posted a 3.27 ERA, 5.7 K/9 and 1.4 BB/9 in 33 innings. MLB.com ranked McWilliams the Phillies’ No. 27 prospect, noting that he’s big (at 6’7) and can throw in the mid-90s. He has a changeup but is still developing his breaking stuff, making him a bit of a project.

McWilliams appears to be an interesting lottery ticket, but the Diamondbacks’ return for Hellickson looks relatively modest, which isn’t surprising. MLBTR’s Steve Adams noted last week that Hellickson was a potential non-tender candidate, while also pointing out that a trade was a possibility. Hellickson is useful, but perhaps not worth $6.6MM, and Diamondbacks GM Dave Stewart has shown interest in pursuing higher-wattage pitching talent this offseason. Clearing Hellickson’s rotation spot and salary appears to help him do that.

CSNPhilly.com’s Jim Salisbury first reported that the two sides were working on a trade (Twitter link). Baseball Essential’s Robert Murray first tweeted that the deal was done, adding that a right-handed pitching prospect would head to the D-Backs in the exchange. John Gambadoro of Arizona Sports 98.7 reported that McWilliams was the pitcher in question (Twitter link).