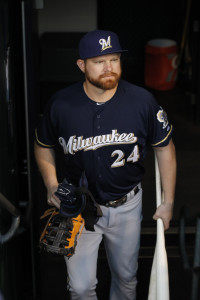 Following the trades of Mark Trumbo and Logan Morrison, the Mariners had a clear need for an upgrade at first base, and Lind should fill that void nicely. The 32-year-old is coming off a strong season with the Brewers in which he batted .277/.360/.460 with 20 home runs in 572 trips to the plate. Milwaukee made the easy call to exercise his $8MM club option this offseason, though the expectation has long been that the rebuilding Brewers would look to trade the final year of club control over Lind, who will be a free agent next winter.

That, of course, makes Lind a short-term upgrade for the Mariners, who will probably also look to add a platoon partner for him (although an in-house option like Jesus Montero could function well in that capacity). Lind batted just .221/.277/.298 against left-handed pitching in 2015 and was limited to 112 plate appearances against same-handed pitching, as his troubles in that regard are a known factor in his game. In parts of 10 seasons at the Major League level, Lind has batted just .213/.259/.327 against lefties. On the flip-side of that ugly split, however, is an impressive .293/.354/.509 batting line against right-handed pitching. Assuming a strict platoon deployment, Lind figures to give the Mariners a nice boost in on-base percentage at first base, and one can imagine a platoon of him and a righty with some notable pop — Mike Napoli, for instance, is a speculative fit with the Mariners — approximating or exceeding the power output that Trumbo would have delivered in a full-time capacity.

The acquisition gives new Mariners manager Scott Servais the option to run out a lineup that features Lind, Robinson Cano, Ketel Marte, Kyle Seager, Seth Smith, Leonys Martin and Nori Aoki against right-handed pitchers. Servais will have the option to deploy Montero (or a yet-unsigned platoon partner for Lind) and Franklin Gutierrez against left-handed pitching. The Mariners, of course, already have one of the game’s more potent right-handed bats in the form of Nelson Cruz.

The addition of Lind continues what has been one of the most active offseasons for any GM in recent memory, as Jerry Dipoto has wildly reshaped the Seattle roster in his first three months on the job. In addition to trading Trumbo and Morrison, Dipoto has also shipped out Brad Miller, Danny Farquhar, Tom Wilhelmsen, Carson Smith and multiple prospects in order to bring in Martin, Nate Karns, Wade Miley, Joaquin Benoit, Steve Clevenger, Anthony Bass, Luis Sardinas and Evan Scribner. Additionally, he’s re-signed Gutierrez and signed other free agents such as Aoki, Chris Iannetta and Justin De Fratus as he looks to reshape a roster that won a disappointing 76 games in 2015.

As for the Brewers, they’ll receive a trio of young arms that didn’t rank in the Mariners’ top 30 prospect on MLB.com’s end-of-season rankings, although each is exceptionally young and has a good bit of time to rise up the prospect ranks in Milwaukee.

Peralta, 19, did rank as Seattle’s No. 24 prospect in the eyes of Baseball America one winter ago. He spent his second season with the team’s Rookie-level affiliate in Arizona this season, and while he logged an uninspiring 4.11 ERA in 57 innings, he also posted an electric 67-to-8 K/BB ratio while spending most of his time (nine of 11 appearances) as a starting pitcher.

Seattle only signed Herrera, 18, in July of 2014. BA’s Ben Badler wrote at the time that Herrera’s fastball was topping out at 90 mph as a 16-year-old, but his projectable 6’3″, 170-pound frame gave reason to believe that more velocity would come as he filled out. He also noted that Herrera had a 72-74 mph curve ball in his arsenal. Herrera debuted in the Dominican Summer League this past season, pitching to a 3.26 ERA with 73 strikeouts against just 13 walks in 80 innings.

Missaki, 19, is a Brazilian-born right-hander who, as Tom Haudricourt of the Milwaukee Journal-Sentinel tweets, underwent Tommy John surgery back in May. Despite his young age, Missaki opened the season in the Class-A Midwest League and looked impressive in six starts, pitching to a 3.41 ERA with a 34-to-5 K/BB ratio in 34 1/3 innings against markedly older competition. He’ll presumably be ready to take the mound this summer and could see some more action at Class-A upon a return to health.

The three prospects acquired here demonstrate that new Brewers GM David Stearns is committed to restocking the farm and won’t be shy about moving Major League assets for players that are years away from contributing in the Majors. Each of the pitchers acquired has displayed impressive control for a young pitcher, which could be a point of emphasis in future trades as the Brewers look to return to prominence in an absolutely stacked National League Central Division.

Ken Rosenthal and Jon Morosi of FOX Sports initially reported that the Mariners were pursuing Lind and making progress in talks. Jon Heyman of CBS Sports reported that the deal was in place (Twitter link). Jim Bowden of ESPN and MLB Network Radio on SiriusXM said the Brewers would get three minor leaguers (links to Twitter). Joel Sherman of the New York Post tweeted that all three were pitchers.