The Tigers and Yankees have announced a trade that will send left-handed setup man Justin Wilson to Detroit in exchange for right-handed pitching prospects Luis Cessa and Chad Green. 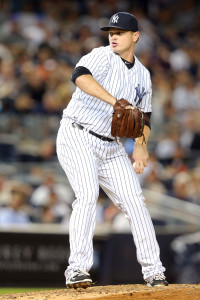 In Wilson, the Tigers will receive the lefty setup man they’ve been seeking and do so at what should be an affordable rate. Wilson is controllable for three seasons via the arbitration process and is projected by MLBTR contributor Matt Swartz to earn $1.3MM next season.

The Yankees acquired Wilson, now 28, from the Pirates last winter in the trade that sent catcher Francisco Cervelli to the Pirates. His first season in New York was largely successful, as he worked to a 3.10 ERA with 9.7 K/9, 3.0 BB/9 and a 43.8 percent ground-ball rate. Wilson was similarly effective against both right- and left-handed batters (.593 OPS and .621 OPS, respectively). It’s a bit odd to see Wilson struggle more against lefties than righties, but he had some control issues when facing same-handed hitters in 2015 (though he hasn’t previously struggled in that regard versus left-handers).

Wilson will join newly acquired closer Francisco Rodriguez and newly signed setup man mark Lowe in the back of a remade Tigers bullpen. He should be the top left-handed setup man for manager Brad Ausmus, while internal candidates like Kyle Ryan, Blaine Hardy and Kyle Lobstein represent options to add a second lefty into the mix.

For the Yankees, the trade means that lefties Chasen Shreve and Jacob Lindgren will be relied upon as the primary lefties in manager Joe Girardi’s bullpen (barring an outside acquisition, of course). New York will pick up the Tigers’ No. 6 and No. 19 prospects, respectively, in Cessa and Green, according to MLB.com’s end-of-season rankings.

If Cessa’s name sounds familiar, it’s because this is the second trade in which he’s been involved in the past six months, although the first was considerably more high profile. Cessa went to Detroit alongside fellow righty Michael Fulmer in July’s Yoenis Cespedes swap with the Mets. The 23-year-old Cessa struggled greatly in his first exposure to Triple-A this season, recording a 6.97 ERA in 64 innings of work. However, he also thrived at the Double-A level, where he logged a 2.91 ERA with a 61-to-17 K/BB ratio in 77 1/3 innings prior to his Triple-A promotion. MLB.com notes that Cessa has a fastball in the 93-95 mph range as well as a slurvy-but-improving breaking pitch and the “makings of a Major League changeup.” He profiles as a back-of-the-rotation starter.

Green, 24, sits 90 to 94 with his own heater, which has heavy sink and which he commands well. However, MLB.com notes that he lacks plus secondary offerings, so he’s a bit of a project. Green spent the entirety of the 2015 season pitching in the rotation for Detroit’s Double-A affiliate, where he recorded a 3.93 ERA with 8.3 K/9 against 2.6 BB/9. Both players picked up in the deal would seem to be on track to pitch in Triple-A early next year, meaning it wouldn’t be a surprise if either arm surfaced in the Majors at some point in 2016.

Jennifer Hammond of FOX Sports Detroit first reported the trade was in place (Twitter link) and added the specifics (link) on the return shortly thereafter.