The Orioles don’t yet know whether Chris Davis will return to Baltimore, but they have a potential replacement on the roster now in the event that he signs elsewhere, as the team has announced the acquisition of Mark Trumbo and left-hander C.J. Riefenhauser from the Mariners in exchange for catcher Steve Clevenger. 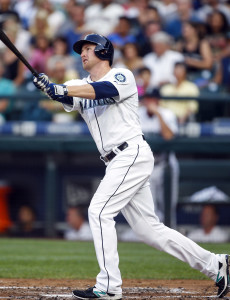 Trumbo, 30 in January, provides insurance in the event that Davis does not return and can be an option in left field or at DH in the event that Davis is re-signed. Alternatively, the Orioles could deploy Trumbo at first base for his final season of club control and use Davis primarily in the corner outfield in 2016 before shifting him back to first base when Trumbo reaches free agency next winter.

Trumbo averaged 32 homers per season from 2011-13 with the Angels and D-backs, but injuries slowed him in 2014, and his power output declined a bit in 2015. In total, he’s a career .250/.300/.458 hitter with 30-homer power that is coming off a .262/.319/.449 season split between Arizona and Seattle. This marks the second time in the past three years that Mariners GM Jerry Dipoto has traded Trumbo, as he sent him to Arizona in a three-team deal that netted Tyler Skaggs and Hector Santiago while serving as GM of the Angels.

From a defensive standpoint, Trumbo is limited. While he has experience at third base, in the corner outfield and at first base, he’s below average at the hot corner and in the outfield. While that limitation and his low on-base numbers suppress Trumbo’s value, he’s still a legitimate source of right-handed power that can handle first base. The Mariners don’t value that skill set at Trumbo’s projected $9.1MM salary, but he can certainly help the Orioles next season, and a move out of Safeco Field could benefit his overall production.

Riefenhauser, a 25-year-old southpaw, was acquired earlier in the winter in the trade that also delivered Nate Karns from the Rays, but will apparently never suit up for Seattle. Riefenhauser has yet to do much of use in the big leagues (6.30 ERA in 20 innings), but has put up excellent minor league numbers. In 113 innings at the Triple-A level, Riefenhauser has a 2.15 ERA to go along with averages of 8.7 strikeouts and 3.2 walks per nine innings pitched.

The 29-year-old Clevenger gives the Mariners a left-handed-hitting complement to Chris Iannetta and makes it easier for the club to give Mike Zunino some further development time at Triple-A. Clevenger, who also has experience at first base and third base, batted .287/.314/.426 with a pair of homers in 105 plate appearances in Baltimore last season. He’s been shuffled between the Majors and minors with the Cubs and Orioles over the past four seasons due primarily to questions about his defense, as he doesn’t have much to prove at the plate in Triple-A. The former seventh-round pick has never shown a great deal of power but consistently hits for average and gets on base at the top minor league level, where he’s a lifetime .310/.372/.413 hitter in 1061 plate appearances.

Clevenger is out of minor league options, so he’ll need to stick with the Major League club out of Spring Training in 2016. While he was projected to split time with Caleb Joseph behind the plate for the Orioles in 2016, a wrench was thrown into those plans when Matt Wieters accepted a qualifying offer. With Wieters and Joseph now slated to be the primary catching duo next season, Clevenger’s role with the team is uncertain.

The trade leaves the Mariners without a definitive answer at first base in 2016. With Trumbo now in Baltimore and Logan Morrison having been dealt to Tampa Bay in the aforementioned Riefenhauser trade, Seattle will likely look outside the organization to bring in a new first baseman. While some might speculate on the possibility of Davis — the man that could theoretically be replaced in Baltimore by Trumbo — Dipoto has operated primarily on the trade market to make his biggest additions thus far and has voiced a preference for that route to free agency. Considering the fact that Seattle has the top unprotected draft pick in 2016 (No. 11 overall), adding Davis would be more costly for the Mariners than any other club. None of that, of course, precludes a run at Davis, but it’s hard to envision him as the team’s top priority.

Bob Dutton of the Tacoma News Tribune first reported that a Trumbo-for-Clevenger swap was close. Jon Heyman of CBS Sports said an agreement was in place (Twitter link). Dutton and MLB.com’s Greg Johns said a second player was in the deal (Twitter links). Dan Connolly of the Baltimore Sun tweeted that Riefenhauser was the second player.