9:10am: Young will earn about $11.75MM over the life of the two-year deal, tweets Jon Heyman of CBS Sports. Andy McCullough of the Kansas City Star hears that it’s slightly less: an $11.5MM total over two years (Twitter link).

DEC. 7, 8:15am: Young does indeed have a deal with the Royals, pending a physical, reports MLB.com’s Jeffrey Flanagan (via Twitter), who adds that Young is in Kansas City at the moment, presumably to take said physical examination.

DEC. 6: The Royals are close to re-signing pitcher Chris Young to a two-year deal, Joel Sherman of the New York Post tweets. The deal is likely to be worth around $10MM to $11MM, and it’s likely to be completed by the close of the Winter Meetings. ESPN’s Buster Olney recently reported that it was just “a matter of timing” before Young and the Royals came to terms. 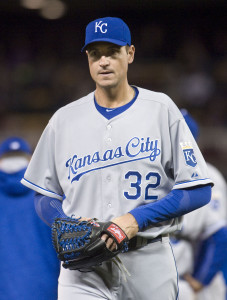 It appears that, as expected, Young’s new deal will be considerably more lucrative than the $675K contract to which he agreed before last season. In the last two seasons, Young has very effective, posting ERAs well below four and pitching a total of almost 300 innings split between the bullpen and the rotation in Seattle and Kansas City.

Young is now 36, and there are plenty of reasons to be skeptical of his prospects for future success — he’s an extreme fly ball pitcher with mediocre peripherals and very little in the way of velocity. Those reasons existed before each of the last two seasons too, however, and Young succeeded despite them. Fangraphs’ Dave Cameron broke down Young’s success in a fascinating column earlier this year, noting that Young has demonstrated an ability to repeat a BABIP that is drastically better than the league average due to his extreme fly-ball tendencies and uncanny ability to induce weak contact.

If the Royals believe in his ability to continue to be useful and versatile, a salary of about $5MM per season does not seem like an unreasonable price to pay. And considering the fact that Kansas City plays in one of the American League’s most expansive ball parks and typically prioritizes outfield defense — Lorenzo Cain is among the game’s best, though they’ll have a significant defensive hole to fill if Alex Gordon leaves — Young’s skill set seems perfectly tailored to succeed with the Royals. It remains to be seen just how many innings Young can handle in a season — the 165 he threw for Seattle in 2014 were his most since 2007, and he’s never even reached 180 — but for the reported price, Young doesn’t need to log 200+ innings in order to more than justify his salary.