The Orioles announced tonight that they have acquired center fielder Michael Bourn from the Diamondbacks in exchange for minor league outfielder Jason Heinrich. To make room for Bourn on the 40-man roster, Baltimore has transferred outfielder Joey Rickard to the 60-day disabled list. 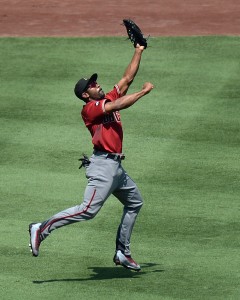 The 33-year-old Bourn becomes the second piece of outfield depth added by Baltimore today, as the O’s also picked up center fielder Drew Stubbs when they claimed him off release waivers from the Rangers. Bourn hasn’t been overly productive on the season overall in Arizona, but he’s had some productive stretches and has been swinging a hot bat as of late. The speedster is hitting .261/.307/.362 in 389 plate appearances with Arizona this season, but his .313/.345/.434 slash and five stolen bases over his past 20 games are more encouraging than his cumulative season stats.

With rosters set to expand tomorrow, Bourn will give the O’s a late-inning option to bring some speed off the bench and perhaps to upgrade the outfield defense over Mark Trumbo or Hyun Soo Kim, neither of whom grades out anywhere close to average with the glove. At 33 years of age and with a recent history of hamstring issues, Bourn isn’t the premium defender and elite baserunner that he once was, but he’s nonetheless graded out as roughly average in center field, per Ultimate Zone Rating, and four runs above average in the eyes of Defensive Runs Saved. As such, he should be a sizable upgrade in terms of run prevention if and when manager Buck Showalter inserts him into the mix late in games with slim leads.

Heinrich, 20, was the Orioles’ fifth-round pick in the 2015 draft. The Florida high school product and Alaska native has spent the season with Baltimore’s Low-A affiliate, batting .231/.301/.347 in 163 plate appearances and is a .251/.331/.365 hitter in a total of 341 plate appearances since being drafted last year. Heading into last year’s draft, Baseball America rated Heinrich as the No. 188 prospect available, writing that the right-handed hitter stood out for his plus raw power to the pull side and impressive bat speed. He profiles as either a right fielder or a first baseman in the long term, per BA.

FOX’s Ken Rosenthal first reported earlier this afternoon that the Orioles were trying to acquire Bourn, while USA Today’s Bob Nightengale called the deal close and FanRag’s Jon Heyman said the two sides had a principle agreement with only final details to be worked out.