The Mets announced that they have acquired right-handed reliever Fernando Salas from the Angels in exchange for minor league right-hander Erik Manoah. Justin Ruggiano has been moved to the 60-day disabled list to make room for Salas on the 40-man roster. 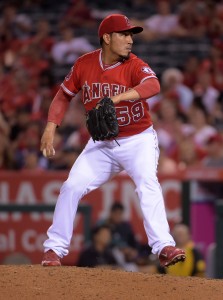 Salas, 31, has pitched to a 4.47 ERA with 7.2 K/9, 3.0 BB/9 and a 41.6 percent ground-ball rate in 56 1/3 innings of relief for the Angels this season. A free agent at season’s end, he represents a pure rental for the Mets, but a fairly affordable one, as he’s earning $2.4MM in his final season of arbitration eligibility. Salas has $419K of that sum remaining on his salary through season’s end. While his numbers certainly aren’t eye-catching, it’s worth noting that Salas has largely righted the ship after a dreadful month of June and has pitched quite well since early July. While the endpoint here is highly arbitrary in nature, Salas has a 2.60 ERA with an 18-to-7 K/BB ratio and a 48 percent ground-ball rate in his past 17 1/3 innings out of manager Mike Scisoscia’s bullpen.

With the Mets, Salas figures to work primarily in the seventh inning, as the eighth inning is typically the property of resurgent setup man Addison Reed, while the Mets boast one of baseball’s best closers in the form of right-hander Jeurys Familia. By acquiring Salas tonight, the Mets have ensured that he can be a part of the club’s roster in the event that they make it to the postseason. The deadline for newly acquired players to receive postseason eligibility is midnight EST.

Manoah, 20, was the Mets’ 13th-round pick in the 2014 draft. The Miami-area prep product hasn’t performed particularly well in his pro career to date, pitching to an ERA north of 5.00 in both 2015 and 2016. However, he has shown a penchant for missing bats, racking up 63 strikeouts in 62 innings out of the rotation for the Mets’ short-season Class-A affiliate this year, and he also keeps the ball on the ground quite well, as evidenced by a 50 percent ground-ball rate.