SEPT. 15: The Yankees have announced the signing of Butler to a Major League deal. Right-hander Nathan Eovaldi has been transferred to the 60-day disabled list to clear a spot on the 40-man roster. 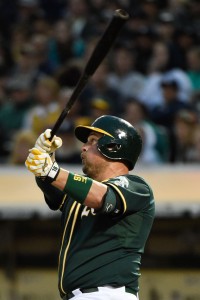 Specifics surrounding the deal aren’t known, but Butler can be had for nothing more than the pro-rated portion of the league minimum through season’s end following his release by Oakland. That means it’ll cost the Yanks about $50K to add Butler into the mix, presumably for the remainder of the 2016 campaign only.

Butler, 30, signed a three-year, $30MM contract with the A’s prior to the 2015 season – a move that paid very little in the way of dividends for Oakland. The longtime Royals DH struggled in both seasons he spent wearing green and gold, hitting a collective .258/.325/.394. While that production graded out as roughly average when factoring in the Athletics’ cavernous home park (99 OPS+), a league-average bat at the DH slot (and occasionally at first base) isn’t a positive outcome on a $10MM annual investment.

As Mike Axisa of River Avenue Blues points out (Twitter link), however, the Yankees started light-hitting backstop Austin Romine at designated hitter tonight against a left-handed pitcher. Butler could give the Yankees a solid, low-cost option against southpaws for the remainder of the season, and they’ll be facing no shortage of left-handed opponents; Ken Rosenthal of FOX Sports notes that the Yanks are slated to face lefties in seven of their next 11 games (Twitter link).

That said, it should be noted that a large reason for the decline in performance from “Country Breakfast” is the fact that his numbers against lefties have plummeted in the past two seasons. Butler crushed lefties at a .314/.393/.519 clip from 2007-14 despite playing his home games at the pitcher-friendly Kauffman Stadium, but he’s managed only a woeful .226/.329/.358 line against lefties since signing in Oakland.

Few would’ve thought that the Yankees would be in this position at the non-waiver trade deadline when they parted ways with Aroldis Chapman, Andrew Miller and Carlos Beltran in order to acquire prospects, but New York currently sits just two games back from an American League Wild Card spot. However, they just lost a right-handed option earlier today with the news that Aaron Judge has been placed on the disabled list due to an oblique strain, thinning out the club’s right-handed options at the plate. Of course, if the Yankees are able to close the two-game gap that currently faces them, Butler would be ineligible to join the postseason roster, having been added to the organization after the Aug. 31 postseason eligibility deadline.