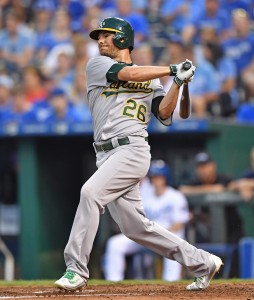 The 32-year-old Valencia has hit well in each of the past two seasons, most recently posting a .287/.346/.446 line in 517 plate appearances with Oakland in 2016. He also logged substantial playing time at three positions (third base, first base and right field), giving him a bit of defensive versatility. He graded poorly at third, though, and got in a clubhouse altercation with Billy Butler that resulted in Butler heading to the 7-day concussion DL.

Butler was released soon after, and although the Athletics said Butler’s release was unrelated to the clubhouse fight, it seemed by season’s end that the A’s were looking to move on from Valencia. Youngster Ryon Healy received the bulk of the Athletics’ available playing time down the stretch at third base. It already looked possible the A’s could look outfield help this winter, and now it looks even more likely that they will.

Valencia has one more year of club control remaining before he’s eligible for free agency, and we project he’ll make $5.3MM next season. The Mariners obviously have a good third baseman in Kyle Seager, but Valencia could be a factor at first base and/or in the outfield. At first, his right-handed bat might pair well with that of lefty Dan Vogelbach.

The 22-year-old Blackburn, who arrived with Vogelbach in the Mike Montgomery deal in July, ranked as the Mariners’ 18th-best prospect, according to MLB.com. The Cubs made him the 56th overall pick in the draft in 2012. He throws sinkers in the low 90s and has what MLB.com describes as solid secondary stuff and a good feel for pitching, so perhaps he could profile as a back-of-the-rotation type in the big leagues. He produced a 3.27 ERA, 6.2 K/9 and 2.2 BB/9 in 143 Double-A innings in 2016.