10:00am: The teams have announced the trade. The Brewers will also receive a player to be named later or cash from the Red Sox.

8:20am: Tuesday morning at the Winter Meetings kicked off with some action, as the Red Sox reportedly agreed to a trade that will net them right-handed setup man Tyler Thornburg from the Brewers in exchange for third baseman Travis Shaw, minor league shortstop Mauricio Dubon and minor league right-hander Josh Pennington. 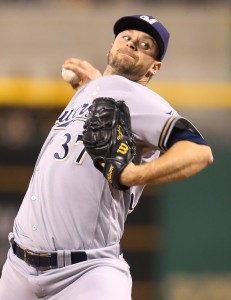 Thornburg, 28, gives the Red Sox not only an imposing late-inning force but one that is under club control for the next three seasons, as he won’t be eligible for free agency until after the 2019 season. The former starter had a breakout season in the Milwaukee bullpen last year, pitching to a 2.15 ERA with 12.1 K/9, 3.4 BB/9 and a 32.4 percent ground-ball rate in 67 innings. MLBTR contributor Matt Swartz projects a $2.2MM salary for Thornburg in his first trip through the arbitration process.

Late-inning relief help has been a priority for the Red Sox, who saw Koji Uehara, Brad Ziegler and Junichi Tazawa all hit free agency at season’s end and also went without 2015 trade acquistion Carson Smith in 2016 due to Tommy John surgery. Thornburg will give manager John Farrell an intriguing setup option to closer Craig Kimbrel. Thornburg figures to slot in alongside converted starter Joe Kelly and Matt Barnes as right-handed options for the time being, though there’s certainly room for Boston president of baseball ops Dave Dombrowski to add another relief arm to the mix.

The Brewers have now traded their three top relief arms in the past five months, sending Jeremy Jeffress to the Rangers, Will Smith to the Giants and Thornburg to Boston. As it stands, right-hander Corey Knebel could be in line to see save opportunities in Milwaukee, though the team could host an open competition there. Alternatively, Milwaukee could lure a second- or third-tier arm to their rebuilding club on an affordable deal with the promise of offering an opportunity to close out games. In addition to providing the Brewers with some needed veteran stability in the ’pen, that tactic could also yield yet another midseason trade chip if he ultimately performs well in a high-leverage role.

The package that the Red Sox are giving up will be headlined by Shaw, who should slot in as the primary third baseman for his new organization. Shaw struggles against left-handed pitching and may well require a platoon partner, but he’s a controllable addition for Milwaukee GM David Stearns. Shaw hit .257/.325/.437 against right-handed pitching last year and showed potential 20-homer pop by hitting 16 homers in 530 plate appearances. He hit just .187/.235/.364 in 115 PAs against lefties, but he stands out as a solid if not well-above-average defender at the hot corner, depending on one’s preferred metric (+1.1 UZR, +10 DRS). 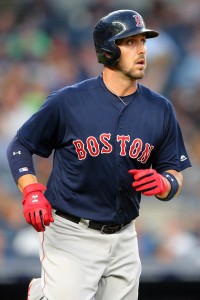 Most important, when it comes to Shaw, is that he’s controllable for another five years and won’t even be eligible for arbitration until after the 2018 season, making him an eminently affordable long-term piece. His inclusion in the deal opens a number of doors for both teams. In Milwaukee, it seems as though his acquisition definitively pushes Jonathan Villar off third base and over to second base, as has been suggested, thereby making Scooter Gennett either a bench piece or trade fodder himself. The Red Sox, meanwhile, could use Brock Holt and/or Pablo Sandoval at third base until Yoan Moncada proves ready to inherit the position on an everyday basis. Boston could also realistically look to pursue a different upgrade at third base, either via free agency or trade, as they look to field the best Opening Day roster possible in a season where they once again plan to push for a deep postseason run.

Dubon, 22, was a 26th-round pick by Boston back in 2013 but has risen to the point where he’s regarded as one of the organization’s top overall prospects. Baseball America rated him seventh (subscription required and recommended) among Boston farmhands earlier this offseason, writing that he doesn’t have one plus tool but has very good bat-to-ball skills and enough defensive ability to play an average or better shortstop. He’s also plenty versatile, having spent time at second base and in center field, making him a potential utility option in the Majors at the very least. He could open 2017 in either Double-A or Triple-A, depending on how aggressive the Brewers want to be with him. Dubon split the 2016 season between Class-A Advanced and Double-A, where he batted a combined .323/.379/.461 with six homers and 30 steals.

The 21-year-old Pennington was Boston’s 29th-round pick in 2014. While he didn’t crack the top 10 recently penned by BA, he did rank 22nd on MLB.com’s midseason list of Boston’s top 30 prospects. Per their report (via Jonathan Mayo and Jim Callis), Pennington boasts a 70-grade fastball (on the 20-80 scale) but doesn’t get great movement on the pitch or command it especially well. They also note that he has the makings of an above-average curveball as well as a work-in-progress changeup. He’s a starter for now but could move to a short-relief role if that doesn’t pan out, and one can envision his velocity ticking upward further if that plays out. Pennington spent 2016, his age-20 season, with Boston’s short-season Class-A affiliate, pitching to a 2.86 ERA with 7.8 K/9 against 4.3 BB/9 in 56 2/3 innings.

Evan Drellich of the Boston Herald first reported that the two teams had agreed to a trade that would send relief help to Boston and Dubon to Milwaukee (Twitter links). Baseball America’s Josh Norris tweeted that Pennington was in the deal, and Alex Speier of the Boston Globe reported (on Twitter) that Shaw was expected to be included. FOX’s Ken Rosenthal first tweeted that Thornburg was going to Boston.