The Braves continued their pattern of adding veterans on one-year commitments Monday, announcing the signing of Kurt Suzuki to a one-year contract. The MVP Sports client will reportedly receive a $1.5MM guarantee and can earn up to $2.5MM worth of incentives based primarily on games started. The Braves had an open 40-man roster spot, so no corresponding move is necessary to accommodate the signing. Atlanta’s 40-man roster is now full. 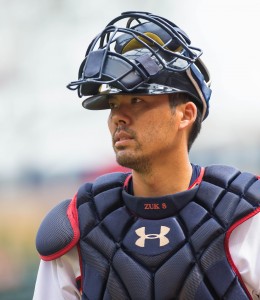 In Atlanta, Suzuki joins Tyler Flowers as the Braves’ top catching options.  A traditional platoon isn’t an option since both are right-handed hitters, though Flowers is likely to get the bulk of starts behind the plate given his superior pitch-framing abilities.  Both Baseball Prospectus and StatCorner ranked Flowers as one of the game’s best framers last season, while Suzuki was ranked near the back of the pack.  (Suzuki’s defensive issues reportedly played a part in a relative lack of trade interest in his services last summer.)

The Braves have been looking for catching help for much of the offseason, heavily pursuing Jason Castro and also being linked in rumors to the likes of Welington Castillo, Nick Hundley, Brian McCann and Matt Wieters.  Suzuki represents something of a fallback option to those higher-profile names, and with Atlanta now ostensibly set behind the plate, it further limits the market for the still-unsigned Wieters and Hundley.

Rosenthal notes that with Suzuki now in the mix for the Braves, backup Anthony Recker could receive some trade interest from other teams.  Atlanta has also added Blake Lalli and David Freitas as minor league depth this winter, and already acquired and then traded away veteran Tuffy Gosewisch.