FEB. 9: The Mets have announced the signing. FanRag’s Jon Heyman tweets that Blevins will earn $5.5MM in 2017 and has a $7MM club option for the 2018 season that comes with a $1MM buyout.

FEB. 3, 8:10pm: The deal includes an option, per James Wagner of the New York Times (via Twitter).

7:52pm: The Mets have agreed to a deal to bring back free-agent lefty Jerry Blevins, according to Jon Heyman of Fan Rag (via Twitter). He’ll be guaranteed around $6MM in the deal, per Ken Davidoff of the New York Post (via Twitter). 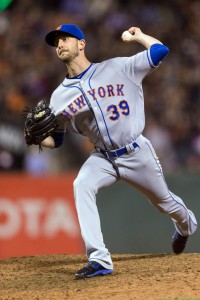 With the move, New York further adds to a relief corps that already saw new additions earlier today. The organization also brought back righty Fernando Salas and brought in southpaw Tom Gorzelanny on a minor-league pact for depth.

Blevins, though, was arguably a particular priority for New York. He’ll step in front of Josh Edgin and Sean Gilmartin in the pecking order among southpaws. Gorzelanny joins other depth options, including Josh Smoker and Adam Wilk.

Ultimately, it’s an appealing price tag for the Mets, who brought back Blevins last year for $4MM after an injury-shortened 2015 season. The results were excellent for both team and player, as Blevins turned in what was arguably his best full season as a big leaguer.

Over 42 innings last year — compiled across a personal-high 73 appearances — Blevins worked to a strong 2.79 ERA with 11.1 K/9 and 3.2 BB/9 to go with a 45.8% groundball rate. Long a weapon against opposing lefties, Blevins has increased his effectiveness against righties since coming to New York, perhaps aided by the increased deployment of his cut fastball. He also throws a sinker, a slider, and (much less frequently) a change.

With Blevins signed, the bulk of the left-handed relief market has now settled out. It’s interesting to see how things landed. Blevins, Boone Logan, and J.P. Howell all settled for single-season pacts, while Brett Cecil, Mike Dunn, and even Marc Rzepczynski landed bigger guarantees in multi-year arrangements.