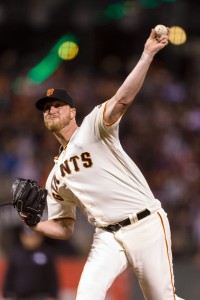 Will Smith to undergo Tommy John surgery.  The Giants bullpen took a big hit with the news that Smith will undergo TJ surgery next week, bringing an unfortunate conclusion to the ongoing elbow troubles that have plagued Smith all spring.  Smith, acquired from the Brewers at last summer’s trade deadline, was slated to be the top left-handed option out of San Francisco’s bullpen but will now miss all of 2017 and likely the initial part of the 2018 season.  The Giants still have Josh Osich, Steven Okert, and possibly Ty Blach as internal southpaw options, though it wouldn’t be surprising if the Giants look for another lefty in a trade or on waivers as teams begin making their final Spring Training cuts.

White Sox sign Tim Anderson to extension.  The rebuilding White Sox clearly see Anderson as a big part of their future, and the team put that in writing by guaranteeing the shortstop $25MM over the next six seasons.  The deal also contains club option years for 2023 and 2024 that could add another $24.5MM to Anderson’s haul.  Anderson, the 17th overall pick of the 2013 draft, hit .283/.306/.432 with nine homers in 431 PA last season, finishing seventh in AL Rookie Of The Year balloting.

Indians close to extension with Jose Ramirez.  Speaking of AL Central teams locking up key contributors, Ramirez and the Tribe are close to a four-year, $26MM extension that also includes two club option years (worth $11MM and $13MM, respectively).  Ramirez’s surprising emergence was a big factor in Cleveland’s run to the AL pennant last season, and the team will now add the versatile 24-year-old to their long list of key players under long-term deals.

Blue Jays close to extension with John Gibbons.  Continuing with the extension talk, the Jays have also “basically finished” (in the words of Sportsnet’s Shi Davidi) a new contract with manager John Gibbons.  The new deal would keep Gibbons in the fold through 2020, with the Jays holding a club option on the skipper for the 2020 season.  Gibbons owns a 644-614 record over his two stints as Toronto’s manager, and has led the Blue Jays to the ALCS in each of the last two seasons.

Rays sign Derek Norris.  With Wilson Ramos on the DL until May or June, the Rays decided to bolster their catching corps by agreeing with Norris on a one-year, $1.2MM deal.  The fact that Tampa could offer Norris significant playing time (as Ramos will still require a lot of DH time when he does return) reportedly gave the Rays the edge over four other suitors for the catcher’s services.