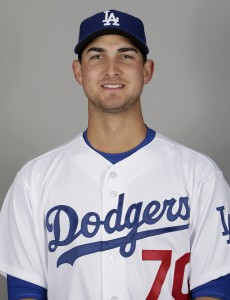 De Jong, 23, was the Blue Jays’ second-round pick back 2012 but was traded to Los Angeles alongside second baseman Tim Locastro in a swap that sent international bonus money to the Blue Jays.

The former No. 81 overall pick has raised his profile since joining the Dodgers organization and is coming off an impressive 2016 campaign that saw him reach Triple-A for the first time. De Jong tossed just 5 1/3 innings in Triple-A (allowing one run and striking out eight against one walk) but also delivered an excellent campaign at the Double-A level. With Tulsa, the righty logged 141 2/3 innings with a 2.86 ERA, 7.9 K/9, 2.5 BB/9 and a 38.3 percent ground-ball rate.

Last offseason, Baseball America ranked De Jong 16th among Dodgers farmhands, praising his feel for a solid-average curveball. That scouting report noted that his 88-92 mph fastball, which can top out at 94 mph, is a bit straight. He also sports a fringe-average changeup, per BA, and could eventually surface in the Majors as a back-of-the-rotation arm.

De Jong will give the Mariners another upper-level arm to provide depth beyond a rotation that projects to include Felix Hernandez, Hisashi Iwakuma, Drew Smyly, James Paxton and Yovani Gallardo. De Jong will join Dillon Overton, Rob Whalen, Ariel Miranda and Cody Martin — each of whom has been acquired by Seattle GM Jerry Dipoto in the past calendar year — as an upper level depth option. De Jong is merely the latest trade acquisition for the game’s most active general manager, as Dipoto is now up to 14 trades this offseason and 40 total since being tabbed as the Seattle GM following the 2015 season (hat tip: MLB.com’s Greg Johns, on Twitter).

As for the Dodgers’ return, the 23-year-old Jackson rated 12th among Mariners’ farmhands, per MLB.com, and ranked 18th among Seattle prospects in the eyes of ESPN’s Keith Law (subscription required/recommended). The 2015 fifth-rounder spent last year at the Class-A Advanced level, where he batted .258/.332/.345 with six homers and 16 steals in 596 plate appearances. Jackson swiped 47 bags in Class-A a year prior, and the scouting reports from both MLB.com and from Law praise his speed, throwing arm and defensive prowess. His power is a question, though, as Jackson has just eight long balls in 862 pro plate appearances. Law noted that Jackson lacks power and hits the ball on the ground with regularity.

Baseball America was more bullish on Jackson this winter, ranking him seventh among Mariners prospects and calling him a potential everyday shortstop, though they too note that he’s routinely graded as a “fringe-average hitter with below-average pop.” Still, Jackson’s “double-plus” speed and arm create plenty of hope in BA’s scouting report (subscription required/recommended to read in its entirety).

Zabala, 20, spent the 2016 season in the Rookie-level Arizona League, pitching to a 2.88 ERA with a 28-to-15 K/BB ratio in 25 innings. He’s been used out of the bullpen exclusively in each of the past two years, and Law notes that he reached 99 mph in 2016. MLB.com rates him 22nd among M’s farmhands and puts a hefty 75 grade on his fastball, though he receives 40-grade control from that report. Zabala’s curveball draws praise from each report, though it’s not regarded nearly as well as his fastball. Low-level arms with this type of velocity are becoming more common in today’s game, but he makes for a nice long-term lottery ticket of sorts to add to a deep Dodgers farm system.

Losing his roster spot in all of this is the 29-year-old Freeman, who made his Major League debut in 2016 but received just 24 plate appearances between the D-backs and Mariners. Seattle claimed Freeman off waivers from Arizona shortly after the non-waiver trade deadline. In 503 Triple-A plate appearances last year, the former 11th-round draft pick hit .314/.285/.419 with four homers, 23 doubles and six triples. Those numbers, tallied across 104 games, bear a striking resemblance to the second baseman/outfielder’s career marks in 298 contests: .314/.376/.424.

The latest Mariners trade leaves Seattle with a full 40-man roster but does create an opening on the 40-man for the Dodgers, should they wish to make another move in the coming days. Alternatively, the Dodgers could simply keep the spot open to create the flexibility for some waiver activity throughout the remainder of Spring Training.