The D-backs and Angels have struck a trade that sends righty David Hernandez from Anaheim back to the familiar environs of Arizona. Young right-hander Luis Madero is going to the Angels in the deal. 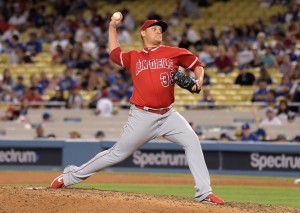 Hernandez will deepen the Arizona pen as the club looks to solidify its hold on a Wild Card spot down the stretch. He has provided the team with plenty of good innings in the past, pitching to a 3.54 ERA over 233 2/3 innings from 2011 through 2015.

The 20-year-old Madero has struggled through 49 1/3 innings between Rookie ball and Class-A this season, limping to a 5.69 ERA while working as a starter. He has been hit especially hard since moving up a level. That said, the peripherals look much more promising for the young Venezuelan. He currently carries 8.3 K/9, 2.0 BB/9 and a 47.8 percent ground-ball rate on the year.