The Astros have added lefty Francisco Liriano from the Blue Jays in exchange for veteran outfielder Nori Aoki and younger outfielder Teoscar Hernandez. 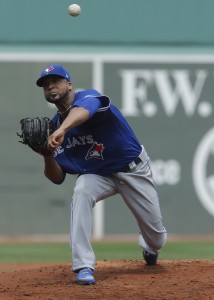 Houston is said to view Liriano as a reliever for the remainder of the season. While the 33-year-old Liriano has had a poor season in the Toronto rotation, he’s maintained his velocity and his effectiveness against left-handed opponents. That’s led to plenty of speculation, both here and elsewhere, that the veteran southpaw could emerge as a possible bullpen option for teams unwilling to meet the asking prices on the market’s top relievers.

Through 63 plate appearances this season, left-handed opponents are batting just .230/.254/.361 against Liriano. The lefty has a 17-to-1 K/BB ratio in those matchups and has averaged nearly 93 mph on his fastball this season. One would imagine that in moving to a short relief role, that velocity could tick upward a couple of notches.

Liriano is a free agent at season’s end and is earning $13MM in the final campaign of a three-year, $39MM contract. He’s still owed about $4.48MM of that sum.

Aoki, 35, is earning $5.5MM in 2017 and is owed $1.89MM of that sum through the end of the year. It’s not clear if there’s additional cash in the deal, but as it stands, the Jays will be saving about $2.59MM this this swap. Considering Houston is sending a minor leaguer as well, though, it wouldn’t at all be a surprise for Toronto to pick up some of all of the remaining tab on Liriano.

Aoki has batted .272/.323/.371 through 224 plate appearances this season. While he’s under club control through the 2018 campaign via arbitration, his age and lack of offensive output make him a non-tender candidate after the season, as he’d likely be in line for a raise that would send his salary north of $6MM.

The 24-year-old Hernandez ranked ninth among Houston farmhands on MLB.com’s midseason top 30 list and is a more or less MLB-ready commodity. He’s hitting .279/.369/.485 with a dozen homers and a dozen steals through 347 Triple-A plate appearances this year.

Hernandez hasn’t exactly thrived in a small sample of 113 MLB plate appearances, but he’s held his own with a .230/.304/.420 slash. The Astros likely deemed Hernandez somewhat superfluous, however, with George Springer, Josh Reddick and Derek Fisher all in the Majors, to say nothing of top prospect Kyle Tucker lurking in the upper minors.