The Rays and Orioles slipped a small-scale, last-minute move in just prior to Monday’s non-waiver trade deadline, with infielder Tim Beckham heading from Tampa to Baltimore in exchange for minor league right-hander Tobias Myers. Both teams have announced the deal. 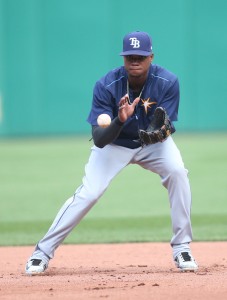 Beckham, 27, was the first overall pick of the 2008 draft but has yet to live up to that billing. He has, however, provided nearly league-average offense in a somewhat limited role with the Rays over the past three seasons, hitting a combined .245/.299/.421 with 26 homers in 783 plate appearances (96 OPS+).

After narrowly qualifying as a Super Two player this past offseason, Beckham agreed to a one-year deal worth $885K with the Rays to avoid arbitration for the first time. The O’s will now control him for another three seasons via that arbitration process, should they see fit.

With J.J. Hardy on the shelf and a lack of quality internal options to replace him, Beckham will likely step into semi-regular playing time at shortstop with Baltimore — an opportunity that was not present for him with the Rays. Barring a huge surge in production over the season’s final two months, it doesn’t seem likely that he’ll be a consideration for the regular job next season, but Beckham does have experience at multiple infield positions and could be a utility piece for the O’s moving forward.

Myers, who turns 19 later this week, was the Orioles’ sixth-round pick just last year. He’s currently pitching against older competition in short-season Class-A and holding his own, with a 3.94 ERA and an excellent 35-to-6 K/BB ratio through 29 2/3 innings.

Tampa Bay’s acquisition of Lucas Duda pushed Brad Miller to shortstop, leaving Duda and Logan Morrison to share time at first base and DH. With midseason pickups Trevor Plouffe and Adeiny Hechavarrria both also in the mix for the Rays, Beckham’s path to playing time was cloudier than ever, which likely accelerated the Rays’ efforts to facilitate a move. While Myers won’t slot in near the team’s top-ranked prospects, he gives the Rays a fairly low-level lottery ticket with encouraging K/BB numbers — a reasonable return for a player likely viewed to have a limited ceiling at this point.

Marc Topkin of the Tampa Bay Times reported the agreement and the Rays’ return (Twitter links).