Duda is playing on a $7.25MM salary this year, just over $2.6MM of which remains and all of which will be absorbed by his new team, per Joel Sherman of the New York Post (Twitter link). To create 40-man roster space, the Rays have designated outfielder Shane Peterson for assignment, as Marc Topkin of the Tampa Bay Times first reported (via Twitter).

Duda, 31, has posted compelling offensive numbers this year after an injury-riddled 2016 season. Through 291 plate appearances, he has slashed .246/.347/.532 and delivered 17 home runs, largely matching the output he provided in his excellent 2014 and 2015 campaigns. 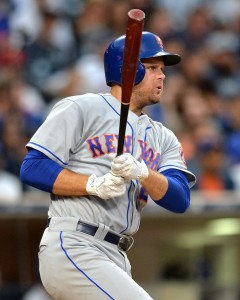 Clearly, the slugger has his limitations, beginning with the fact that he only plays first base (where he has graded as an average defender). He strikes out in about a quarter of his trips to the plate and carries a .246 batting average both this year and in his career. And he’s definitely better against right-handed pitching, though Duda has been better than usual against southpaws this year. But the power is obviously legitimate — Duda has knocked 125 career dingers — and he knows how to draw a walk (12.7% BB rate on the year).

Though the Rays have their own breakout offensive performer at first in Logan Morrison, the team has room for another big left-handed bat. With outfielder Colby Rasmus hanging up his spikes mid-way through the year, the Rays could utilize Corey Dickerson in the outfield to allow Duda to step in at DH.

For the Mets, the move helps to alleviate an immediate roster logjam by opening the door for Jay Bruce to play first base. Of course, that’s not likely to last long, as he and others could yet be on the move. New York will ultimately provide top prospect Dominic Smith his first taste of the majors; with the departure of Duda, that could come in short order.

Meanwhile, New York picks up a pitcher who could be a contributor in New York as soon as the present season — though the Mets likely won’t be in a rush to add him to the 40-man roster. Smith, 23, was a third-round pick in the 2015 draft. He made his way to the Rays as the player to be named later in the winter deal that sent Mikie Mahtook to the Tigers.

With a big fastball and quality curve, Smith looks as if he could turn into a steady and affordable MLB relief asset. The MLB.com prospect team ranked him 30th on the Tampa Bay farm, noting that his upside is as a setup arm. Smith threw 28 2/3 innings of 2.20 ERA ball at the High-A level upon landing with the Rays organization and recently ascended to Triple-A after a quick stop at the penultimate level of the minors.

Joel Sherman of the New York Post first reported that a deal had gained momentum (Twitter links) after Marc Carig of Newsday reported earlier that Tampa Bay had shown some interest in Duda. Jeff Passan of Yahoo Sports (via Twitter) had Smith’s inclusion. MLB.com’s Mark Feinsand tweeted that the deal was complete.