12:05pm: General manager Mike Rizzo tells reporters that the decision had nothing to do with contractual negotiations (Twitter links via Jorge Castillo of the Washington Post). In fact, there were never any actual negotiations, and no contract was offered to Baker. “Winning a lot of regular season games and winning divisions is not enough,” said Rizzo.

11:11am: The Nationals announced on Friday that Dusty Baker will not return as the team’s manager for the 2018 season. Baker’s contract only ran through the 2017 season, but the two sides had reportedly been discussing the possibility of a reunion prior to today’s announcement. The Nats offered the following statement in their release: 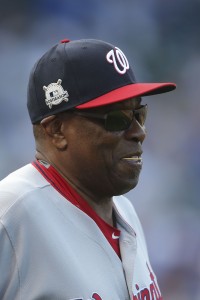 “The Lerner family, on behalf of the entire organization, would like to thank Baker for his two years in the dugout. He led the team to the first back-to-back division titles in our history and represented our club with class on and off the field. We wish him the best going forward.

The contracts for the Major League coaching staff have also expired. The Nationals’ search for a new manager will begin immediately, and we will work with that person to build his coaching staff.”

Baker, 68, won 95 games in his debut season with the Nationals last year and followed that up with a 97-win campaign in 2017 despite myriad injuries to key players (e.g. Adam Eaton, Trea Turner, Bryce Harper) and an early-season bullpen mess. Rumblings about his lack of a contract for the 2018 season began to surface this summer, but the general consensus while the Nationals were winning during the regular season was that the two sides would eventually work out an agreement to extend their relationship.

That calculus may have changed with yet another Division Series exit for the Nationals, who despite winning the division four times in the past six years, have never advanced to the National League Championship Series. Baker’s Nats fought the Cubs tooth and nail, hanging on until the final out of what proved to be a 9-8 loss in Game 5. Certainly, it’s easy to second-guess any number of managerial decisions with the benefit of hindsight following a postseason exit, though the placement of Jayson Werth in the second spot of the batting order over NL MVP candidate Anthony Rendon (who hit sixth) was panned throughout the Division Series. The communication mishap surrounding Stephen Strasburg’s Game 4 start also appeared to reflect poorly.

That said, it’s difficult to place the blame for another early exit on Baker’s shoulders — particularly after a 97-win season. Baker’s players often voiced admiration and praise as his contract situation lingered in an unresolved state, but the Nats will now be looking for their fourth permanent manager since the 2011 season. Since the franchise moved from Montreal to Washington, D.C. in 2005, the Nationals have had six permanent managers (plus interim skipper John McLaren) in 13 years. No manager has lasted more than three seasons at the team’s helm.

For Baker, the lack of a contract extension is undoubtedly disheartening. He’s voiced on multiple occasions in recent months that he still has a desire to manage and will depart a team that remains stacked with talent and looks very much like a the NL East favorite once again in 2018. There are, of course, other managerial vacancies which Baker can pursue should he choose. While the Tigers formally named Ron Gardenhire their new manager on Friday, the Mets, Phillies and Red Sox are all still without skippers for the 2018 season.

All of those teams are quite a ways into their managerial searches, though, with the Red Sox reported to be particularly close to the end. Baker could also take a year off and once again pursue managerial opportunities that arise following the 2018 campaign, though it’d hardly be a surprise to see his name connected to any of those searches.