6:20am: Ken Rosenthal of The Athletic reports that the two-year deal actually guarantees Smith $15MM.

THURSDAY, 2:32am: Bob Nightengale of USA Today Sports reports that Smith will be paid $14MM over his two-year pact (Twitter link).

WEDNESDAY, 8:18pm: Smith passed a physical in Houston on Wednesday, Kaplan tweets, and the team has announced the agreement. Financial details aren’t yet available.

5:13pm: The Astros have agreed to a deal with free agent reliever Joe Smith, pending a physical, Brian McTaggart of MLB.com tweets. It’s a two-year pact, per Jake Kaplan of the Houston Chronicle (Twitter link). Smith is a client of Excel Sports Management. 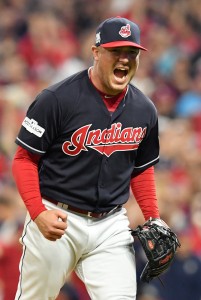 Houston will be the sixth team for the 33-year-old Smith, who has served as a more-than-capable reliever since making his major league debut in 2007. The sidearming, soft-tossing right-hander has racked up a combined 624 2/3 innings of 2.97 ERA pitching and posted a 55.7 percent groundball rate with the Mets, Indians, Angels, Cubs and Blue Jays.

While Smith’s success has come in spite of modest strikeout and walk rates (7.88 K/9, 3.17 BB/9), he found another gear in both departments last season. Across 54 innings divided between Toronto and Cleveland, Smith logged 11.83 K/9 against 1.67 BB/9 and recorded an 11.4 percent swinging-strike rate – a vast improvement over his lifetime mark of 8.4. He joins Bryan Shaw, now with the Rockies, as the second proven reliever to depart the Indians via free agency this winter.

While the World Series-contending Indians have seen their bullpen weaken since last season ended, Smith should step in with aplomb for Luke Gregerson, who left the reigning champion Astros for the Cardinals. Along with Smith, Houston has a host of other quality pieces in the fold in Ken Giles, Chris Devenski, Will Harris, Joe Musgrove and, if he doesn’t start, Brad Peacock, with Michael Feliz and James Hoyt also in the mix.

All of those hurlers are righties, which could lead the Astros to reel in a southpaw at some point this winter, though their relievers did limit lefty-swingers to a .231/.306/.395 line last season. Smith, meanwhile, has typically been effective against lefties, having held them to a .242/.336/.369 mark during his career.