10:15am: Maybin will earn $3.25MM for the coming season, per Jon Heyman of Fan Rag (via Twitter). The deal includes up to $750K in plate appearance-based incentives, per Bob Nightengale of USA Today (via Twitter).

8:00am: The Marlins have announced the signing of outfielder Cameron Maybin, as Tim Healey of the Sun-Sentinel first reported (Twitter link). It’s a one-year, MLB deal for the Excel Sports Management client, though salary terms remain unknown. 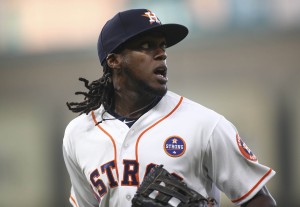 Maybin, 30, will help fill out a Miami outfield mix that was drastically altered with a series of offseason moves. Stars Giancarlo Stanton, Marcell Ozuna, and Christian Yelich were all dealt away, while reserve Ichiro Suzuki departed via free agency.

Those deals did return some younger options, though perhaps only Lewis Brinson is fully prepared for his first full attempt at the major-league level. Otherwise, Magneuris Sierra and Braxton Lee are the only other outfielders currently holding down spots on the 40-man roster.

Expectations for Maybin won’t be too lofty, but he could function as a solid-average, semi-regular player. His strong 2016 season at the plate — .315/.383/.418 — stands out as a bit of an outlier and was no doubt aided by a .383 batting average on balls in play. Perhaps it’s reasonable to expect something that looks more like his 2017 season, which was split between the Angels and Astros. In 450 plate appearances, Maybin slashed .228/.318/.365 with ten home runs and 33 steals while also grading out as a high-end overall baserunner and solid defender.

Adding some veterans to the Marlins outfield unit clearly makes good sense; indeed, it seems reasonable to wonder whether yet further acquisitions could take place. MLB.com’s Joe Frisaro suggests (Twitter link) that Derek Dietrich is likely to see action in left field. Whether or not Brinson is ultimately utilized out of the gates, he’ll be expected to carry a major load in center, with Maybin representing the other possibility up the middle.

Beyond that, though, there still seems to be quite a lot of uncertainty. Minor-league signees Scott Van Slyke, J.B. Shuck, and Rafael Ortega will battle for jobs in camp. Sierra and Lee could as well, though both are rather thin on upper-level experience. Veterans Garrett Cooper and Martin Prado may conceivably see time on the grass, though all have spent the bulk of their careers in the infield. And the organization no doubt hopes that prospect Monte Harrison will force his way into the majors before too long.

This move is the latest for a player who carries an interesting transactional history. It’ll be Maybin’s second stint with the Fish, as he played for the then-Florida Marlins between 2008 and 2010. A former first-round pick of the Tigers, Maybin was shipped to Miami as part of the Miguel Cabrera trade. He was then passed on to the Padres in a deal that sent Edward Mujica and Ryan Webb to the Marlins. After inking an extension with the Friars and then falling out of favor, Maybin ended up moving to the Braves as part of the (first) Craig Kimbrel swap. A second run in Detroit came after a trade with the Braves; the Tigers then shipped Maybin to the Angels, who allowed him to go to the Astros in a surprising August 31st waiver claim last year.