WEDNESDAY: Washington has announced the signing. Benoit also can earn up to $1MM via incentives, per Bob Nightengale of USA Today (Twitter link).

MONDAY: The Nationals have agreed to a contract with free-agent reliever Joaquin Benoit, reports ESPN’s Jerry Crasnick (via Twitter). It’s a one-year, Major League contract worth $1MM for the ACES client, per Jorge Castillo of the Washington Post (Twitter link). 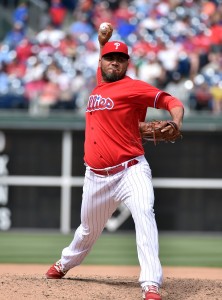 That represented a down season for Benoit, of course, but it was only the second time in the past eight seasons that he’s posted an ERA north of 3.00. Benoit’s average velocity (94.8 mph) and swinging-strike rate (13.3 percent) both remained solid as he pitched for both Pennsylvania clubs last year, and he’ll look to keep those positive trends going as he seeks to rebound in terms of overall run-prevention.

Dating back to the 2010 season, Benoit has turned in a 2.64 ERA (3.37 FIP, 2.95 SIERA) with 9.8 K/9, 2.9 BB/9, 0.98 HR/9 and a 38.3 percent ground-ball rate. He’s no stranger to high-leverage roles, having notched 45 saves and 168 holds across that terrific late-career renaissance, and he’ll give the Nats an experienced arm to complement a late-inning relief corps that also features veterans Sean Doolittle, Ryan Madson and Brandon Kintzler.

It’s not clear on what level the two are related, but it’s nonetheless worth noting that young Koda Glover reported to camp with shoulder soreness and was diagnosed with inflammation following an MRI (via a report from Castillo). He’s not throwing at present, making the added depth from Benoit all the more important.