The Braves have agreed to acquire reliever Brad Brach from the Orioles, Eduardo A. Encina of the Baltimore Sun tweets. In return for Brach, Baltimore received $250K in international bonus pool money, according to Joel Sherman of the New York Post. Both teams have announced the trade. 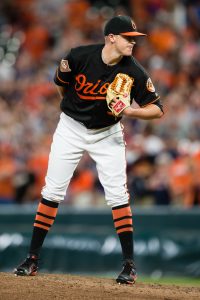 With the Orioles in the early stages of a full-scale rebuild and Brach set to hit free agency over the winter, the 32-year-old was an obvious trade candidate for the club. The right-handed Brach drew vast trade interest as a result in recent weeks, and he’ll bring an impressive track record to Atlanta – which will pick up the balance of his $5.165MM salary.

The Braves, who have surprised this season during a playoff-contending campaign, will benefit from Brach’s presence if he’s able to channel his past success. Even though the Braves are 55-47 and sit just 1 1/2 games behind the NL East-leading Phillies and one back of a wild-card spot, their bullpen hasn’t been a strength this season. Their relievers entered Sunday 19th in the majors in ERA and 16th in fWAR, in part because closer Arodys Vizcaino has missed time on account of shoulder issues. As a result, the Braves have been aggressively seeking to upgrade their relief corps leading up to the July 31 non-waiver deadline. Brach’s the second notable bullpen pickup the team has made this week, in fact, joining just-acquired southpaw Jonny Venters. The Braves also landed Venters for $250K in international money.

Thanks to former general manager John Coppolella’s misdeeds, the Braves are unable to spend beyond $300K on any international prospect this year. Therefore, the money’s not difficult for them to part with if it means bolstering their playoff chances for this season. On the other side, the Orioles haven’t participated in the international market in recent years, largely because of ownership, but they’re committed to changing that as they rebuild. The money the Orioles acquired Sunday may help them sign Cuban outfield prospect Victor Victor Mesa, per Emily Waldon and Ken Rosenthal of The Athletic.

Brach follows shortstop Manny Machado (Dodgers) and fellow reliever Zach Britton (Yankees) as the third proven veteran to exit the Orioles via trade this month. The team’s likely not done, either, as other established members of its roster have come up in trade rumors. Center fielder Adam Jones is part of that group, though he may deviate from Brach, Machado and Britton in finishing the season in Baltimore.