The Orioles have announced a trade that will send right-handers Kevin Gausman and Darren O’Day to the Braves. In return, the Baltimore organization will pick up a group of minor-leaguers — corner infielder Jean Carlos Encarnacion, catcher Brett Cumberland, righty Evan Phillips, and lefty Bruce Zimmermann — along with $2.5MM of international bonus money. 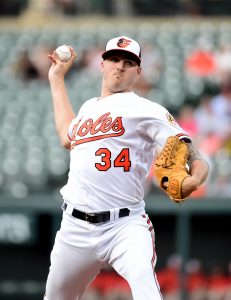 In Gausman, the Braves land a starting pitcher they can control through the 2020 season. He’s earning $5.6MM this year and will be in line for raises via arbitration for the ensuing two campaigns.

The upstart Braves are currently just a half game behind the Phillies in the NL East race, and sit the same distance from a Wild Card spot.  They’ve got lefty Kolby Allard set to make his MLB debut in a spot start tonight against the Marlins.  Otherwise, their rotation consists of Mike Foltynewicz, Sean Newcomb, Julio Teheran, Anibal Sanchez, and Max Fried.  Brandon McCarthy and Mike Soroka are currently on the DL.  It’s unclear at present who will be bumped from the rotation for Gausman.

For the Orioles, Gausman is the first non-rental piece they’ve dealt since committing to a full rebuild with the trade of Manny Machado to the Dodgers. He has since been followed out the door by Jonathan Schoop.  Relievers Zach Britton and Brad Brach have been traded since then as well.

In addition to recouping some prospect capital, those swaps have offloaded a huge amount of cash from the balance sheet this year. The inclusion of O’Day in this particular swap surely influenced the remainder of the return, as he’s sidelined indefinitely with a serious hamstring injury. The veteran reliever is owed $9MM this year and next. That’s not to say he won’t have a chance at becoming a useful member of the Braves’ pen next season.

Of the young players moving in this deal, only Encarnacion (#14) and Cumberland (#30) cracked the most recent top-30 list of Braves prospects from MLB.com. The 23-year-old Phillips is the only one of the players who has seen the majors. He has struggled in four outings this year, but has had a strong showing at Triple-A, with a 1.99 ERA and 13.1 K/9 against 3.1 BB/9 over 40 2/3 innings.

Fancred’s Jon Heyman first reported the swap and international dollars (Twitter links), while Ken Rosenthal of The Athletic had the other aspects of the return (via Twitter).