The Rays and Phillies have announced a swap that sends veteran catcher Wilson Ramos to Philly for a player to be named later or cash considerations. To clear a spot on the roster, lefty Zac Curtis was designated for assignment. 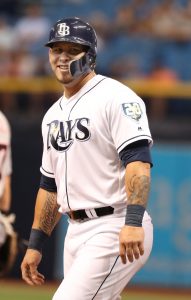 Ramos has been on the DL since mid-July due to a hamstring strain, but he can still be moved if both sides are comfortable with his medical reports. At present, he’s expected to return to action sometime in August.

It’s somewhat of a surprise fit, as catching help hasn’t been reported to be among the Phillies’ top interests leading up to the deadline. That said, Philadelphia backstops are hitting a collective .244/.317/.393 this season, and while that’s solid relative to catchers throughout the league, Ramos would represent a definitive upgrade, health permitting. In 315 plate appearances this season, he’s raked at a .297/.346/.488 clip, slugging 14 homers and 14 doubles along the way.

Rocket-armed Jorge Alfaro has been Philadelphia’s primary backstop this season, and while he’s held his own at the plate, his .254/.305/.398 batting line could stand to be improved upon. If the deal for Ramos ultimately goes through, then he’ll likely pair with Alfaro to shoulder the bulk of the catching load behind the dish this season. Ramos would be the second rental bat the Phillies have acquired in the days leading up to the deadline, as they already landed Asdrubal Cabrera from the division-rival Mets on Friday.

The addition of Ramos might limit Alfaro’s playing time for the duration of the 2018 season, but as a free agent at season’s end, Ramos won’t be a long-term roadblock for Alfaro. Ramos is earning $10.5MM in 2018 — his two-year deal called for an $8.5MM base salary but jumped by $2MM when Ramos started his 55th game last season — and is still owed $3.44MM of that sum before the end of the year.

Mark Feinsand of MLB.com tweeted the deal was done, after Fancred’s Jon Heyman tweeted that it was close. Jeff Passan of Yahoo Sports (via Twitter) first connected the sides today.