2:26pm: This deal is in the books. Righty Jhon Romero is heading to D.C. in return.

2:00pm: The Cubs are nearing an agreement with the Nationals that would bring veteran reliever Brandon Kintzler to Chicago, according to Ken Rosenthal and Sahadev Sharma of The Athletic (Twitter link). The return is not yet known. 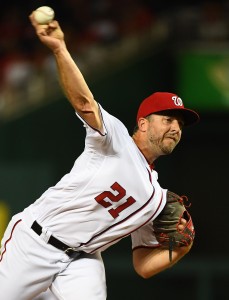 There have been varying reports of late on the Nats’ deadline plans, and it seems they have elected to make at least one sell-side move. It’s hardly clear, though, that this portends further departures. The Nats are reputedly interesting in shaving some money, even if they don’t go for a full teardown, and have replacement options at Triple-A (including Koda Glover and Jimmy Cordero).

Kintzler landed in D.C. this time last year and re-signed with the club over the winter. His contract promises him $5MM this year — around $1.7MM of which remains — and comes with either a $5MM player option or $10MM club option for 2019.

On the eve of his 34th birthday, it seems Kintzler will pack up and join a club he faced in last year’s NLDS clash. The Cubbies have made a few pitching additions already; presumably, this is the last arm to be brought into the organization at the deadline, though there’s still a bit of time left.

Typically a strong groundball hurler, Kintzler has drawn worm burners at a 48.0% rate this year — well shy of his career average. He is, however, generating more strikeouts than usual (6.5 per nine) and carries a sturdy 3.59 ERA over 42 2/3 innings.