2:15PM: The Marlins will receive left-hander McKenzie Mills, Fancred’s Jon Heyman reports (Twitter link).  Mills was an 18th-round pick for the Nationals in the 2014 draft, and the 22-year-old has a 3.51 ERA, 2.58 K/BB rate, and an 8.5 K/9 over 89 2/3 IP for high-A Clearwater this season, with Mills starting 16 of his 20 appearances.  This is the second notable trade Mills has already been part of in his young career, as he was sent to the Phillies from the Nationals last summer in the Howie Kendrick deal.

2:07PM: The minor league pitcher headed to the Marlins is an A-ball player, according to Jim Salisbury of NBC Sports Philadelphia.  MLBPipeline.com’s Jonathan Mayo notes that the prospect wasn’t ranked as one of MLB.com’s top 30 minor leaguers in the Phillies’ system.  (Both links to Twitter.)

1:09PM: The Phillies have acquired first baseman Justin Bour and cash considerations in a trade with the Marlins, The Athletic’s Ken Rosenthal reports (Twitter links).  Miami will receive a minor league pitcher in return.  The two sides worked out a trade after Philadelphia claimed Bour on revocable waivers.

The Marlins will cover roughly half of Bour’s remaining salary for the season, ESPN.com’s Jerry Crasnick reports (via Twitter), which works out to around $450K of the $900K left on the $3.4MM Bour won in an arbitration case with the Phils last winter. 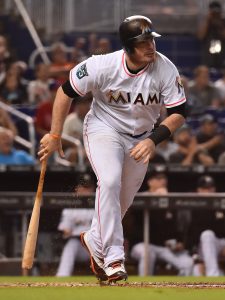 Bour has two more years of arbitration eligibility remaining, though he doesn’t necessarily have a long-term role in Philadelphia with Carlos Santana locked in at first base (at a $20MM average annual salary) at least through the 2020 season.  It could be that the Phillies look to deal or maybe even non-tender Bour this winter, as Rosenthal suggests, and for now they’ll use him as a perhaps overqualified left-handed bench bat.  Bour has badly struggled against southpaws this year while the switch-hitting Santana has hit only a modest .209/.362/.387 against right-handed pitching, so there is some room for a platoon situation.  The Phillies’ collective 93 wRC+ against righty pitching this season ranks just 21st in baseball, so the offense can certainly benefit from some pop from the left side of the plate.

Bour drew a lot of trade attention last winter in the midst of the Marlins’ fire sale, though we didn’t hear much buzz about the first baseman until deadline day itself, when he was the subject of some late-breaking talks.  Bour’s numbers were dampened by an extended slump throughout July, though he is still posting above-average (108 wRC+, 113 OPS+) offensive numbers overall, hitting .227/.347/.412 with 19 homers in 447 plate appearances.

This season, however, Bour is hitting for less power (.184 ISO compared to .247 last year) while also striking out slightly more often and making a bit more soft contact.  Bour also enjoyed a .322 BABIP in 2017 as opposed to a .267 BABIP this year, and there’s also the simple fact that opposing pitchers can focus more directly on Bour since Giancarlo Stanton, Marcell Ozuna, and Christian Yelich are no longer in the Marlins’ lineup.  That said, there is also some evidence that Bour could be due for an uptick in production, as evidenced by that low BABIP and a .352 xwOBA that outpaces his real-world .329 wOBA.