First baseman Justin Bour has signed with the Red Devils of Mexico City (Diablos Rojos del México) for the 2022 season, announced the team on December 30th.  After playing in the Majors from 2014-19 with the Marlins, Phillies, and Angels, Bour spent 2020 with the Hanshin Tigers.  He signed a minor league deal in March 2021 to return stateside with the Giants, but he moved to KBO’s LG Twins after 33 Triple-A games.

Bour, 33, was drafted by the Cubs in the 25th round out of George Mason University back in 2009.  He remains the most successful Major Leaguer from that Virginia college.  Bour joined the Marlins in the 2013 Rule 5 draft.  He became the Marlins’ primary first baseman from 2015-18, finishing fifth in the NL Rookie of the Year voting with a 23-homer debut in ’15.  Bour popped 83 home runs for the Marlins in that span and ranks 12th in franchise history.  A left-handed hitter, Bour generally needed to be platooned against southpaws but still owns a 123 wRC+ against righties in his 559-game MLB career.

Bour, 33, signed a minor league deal with the Giants after Spring Training had begun and opened the 2021 season with their top affiliate in Sacramento. He’s out to a .213/.346/.426 start to the season with six homers, five doubles, a strong 15.4 percent walk rate and a 23 percent strikeout rate in Triple-A. The former Marlins, Phillies and Angels first baseman spent the 2020 season with Nippon Professional Baseball’s Hanshin Tigers in Japan, hitting at a .243/.338/.422 clip with 17 long balls and eight doubles in 379 trips to the plate.

Bour is replacing first baseman Roberto Ramos on the roster for the Twins. Ramos, 26, took the KBO by storm last year in his debut campaign when he hit .278/.362/.592 with 38 home runs, 17 doubles and a pair of triples. The former Rockies prospect has been hindered by a lower back injury throughout the 2021 season, however, and has now been out of action for the Twins since June 9. He batted .243/.317/.422 through 205 plate appearances before the injury sidelined him.

5:03pm: The Giants have agreed to a contract with Justin Bour, the first baseman himself posted in his Instagram profile. It’s a minor-league contract, reports Andrew Baggarly of the Athletic (Twitter link).

After being outrighted off Los Angeles’ 40-man roster, Bour signed a one-year contract with the Hanshin Tigers of Japan’s Nippon Professional Baseball. While there had been some hope he’d rediscover his power stroke in NPB, Bour slashed an unspectacular .243/.338/.422 with 17 homers across 379 plate appearances.

It has now been three years since we’ve seen Bour at peak form, but there’s no risk for San Francisco in bringing him in as depth. First base is sure to belong to Brandon Belt when he’s healthy, but the longtime Giant underwent heel surgery last October and might not be ready for Opening Day. Each of Wilmer Flores, Darin Ruf and Jason Vosler is on the 40-man roster as a potential replacement if Belt can’t go at the start of the season. Among them, only Vosler (who has yet to make his MLB debut at age 27) hits left-handed, so Bour’s lefty bat helps balance the group.

Left-hander Yudai Ohno announced this week that he plans to stay with NPB’s Chunichi Dragons, and MLB.com’s Jon Morosi now adds that the star southpaw inked a three-year pact with the Dragons. Ohno has drawn some MLB interest, but it seems the 32-year-old will stay in Japan for the long term. Given that he’ll be 35 by the time this contract draws to a close, it’s fair to wonder whether he’ll ever pursue an MLB opportunity. The lefty was masterful in 2020, completing 10 of his 20 starts en route to a 1.82 ERA and a 148-to-23 K/BB ratio in 148 2/3 frames. Sports Info Solutions’ Will Hoefer profiled Ohno (among others) following the 2019 season, noting a three-pitch mix — fastball, slider, splitter — with velocity that runs up to 94 mph.

A few more notes from NPB…

Japan’s Nippon Professional Baseball is targeting a June 19 Opening Day. As is the case with the Korea Baseball Organization, the league has plenty of recognizable names for MLB fans to follow as we await the return of baseball in North America. NPB is larger than the KBO (12 teams vs. 10) and has slightly lesser restrictions on foreign players. As such, I split the “names to watch” rundown into two posts — this one covering the Japan Central League and a prior post on the Japan Pacific League.

The 31-year-old Bour signed a one-year, $2.5MM deal with the Halos last winter but turned in a career-worst .172/.259/.364 batting line in his short time with the organization. He continued to display above-average walk tendencies (10 percent in 2019; 11.2 percent career) and also showed above-average power (.192 ISO), but Bour’s 30.6 percent strikeout rate this past season was far and away the highest of his career. Ultimately, he played in just 52 games as an Angel and tallied 170 plate appearances.

The Angels announced today that they’ve outrighted five players from their 40-man roster, all of whom elected free agency rather than accepting an assignment to Triple-A. First baseman Justin Bour, righties Nick Tropeano and Luis Garcia, southpaw Miguel Del Pozo, and two-way player Kaleb Cowart are all now on the open market.

It isn’t terribly surprising to see this handful of players sent packing in advance of an offseason that could be laden with change. The three most experienced names bounced from the roster were all eligible for arbitration. MLBTR projected Bour to earn $2.9MM, Garcia to take home $2.3MM, and Tropeano to cost $1.1MM.

Del Pozo was acquired in August for a trial run, but surrendered 11 earned runs in his first 9 1/3 frames of MLB action. The 27-year-old had shown enhanced strikeout numbers this year at Triple-A, so could be an interesting target. It’s unclear what’s next for Cowart, who attempted to add pitching to his already versatile set of defensive positions. He walked nearly as many batters as he struck out in 17 appearances in the upper minors, working to a cumulative 10.19 ERA.

The Angels announced following tonight’s game that they’ve optioned first baseman Justin Bour to Triple-A Salt Lake. They’ll make a corresponding roster move prior to tomorrow’s game, which, according to Jeff Fletcher of the Orange County Register (Twitter link), will be to select the contract of first baseman/left-handed reliever Jared Walsh.

Bour, 30, was non-tendered by the Phillies in the offseason and inked a one-year deal worth $2.5MM with the Halos. At the time, the hope was that he could help fill in for Shohei Ohtani early in the season and then move into some kind of timeshare at first base and designated hitter. But while he entered the year as a career .260/.344/.466 hitter with 84 home runs in 1563 Major League plate appearances, Bour has batted only .163/.268/.316 through 112 plate appearances with his new club. He’s drawn 13 walks in that time, demonstrating strong knowledge of the strike zone, but has also shown questionable contact skills with a 27.7 percent strikeout rate.

If Bour is able to eventually turn things around, the Angels will be able to control him through the 2020 season as an arbitration-eligible player this winter, but that’s a long way from being a consideration at this point. For now, he’ll simply work to earn another crack at the big league roster.

As for Walsh, the 25-year-old is off to a .302/.398/.604 slash with 10 homers and a dozen doubles on the season so far. He’s also pitched five innings of relief and allowed a pair of runs on five hits and two walks with four strikeouts. He’s more of a position player than a pitcher — Walsh has just 13 2/3 professional innings under his belt in the minors — but he’s an intriguing player to monitor as he gets his first call to the big leagues.

Yusei Kikuchi is on his way to Los Angeles to begin his meetings with prospective MLB teams.  The Japanese southpaw told Sports Nippon (hat tip to Dylan Hernandez of the L.A. Times) that he hasn’t received any official offers from Major League teams, and he didn’t give away any hints about preferred decisions — Kikuchi only answered “of course” when asked if he was open to joining any of the 30 big league clubs.  The 30-day posting window for teams to negotiate with Kikuchi opened on December 4, and representatives from a wide array of teams are expected to make their pitches to Kikuchi in L.A.

More from around the baseball world….

Dec. 12, 7:37 PM: The Angels have struck a deal with first baseman Justin Bour, according to Jeff Passan of Yahoo Sports (Twitter link). The ACES client will receive a $2.5MM salary, presumably on a one-year deal, per Joel Sherman of the New York Post (Twitter link). 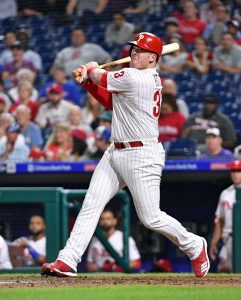 Bour is an interesting addition for the Halos, who already have aging first baseman Albert Pujols (a right-handed hitter) and two-way star Shohei Ohtani (a lefty) on hand as DH options. It seems likely that Bour will take a significant share of the time at first base against right-handed pitching, perhaps squeezing Pujols out of regular plate appearances — at least, that is, if and when Ohtani is ready to return to action at the plate.

The 30-year-old Bour is an intriguing power option, having launched at least twenty long balls in three of the past four seasons. He has generally been quite a high-level offensive producer, though his numbers dipped in 2018 and he doesn’t add value with the other aspects of his game. Though Bour has at times graded as an average defender at first, he’s limited to that position defensively and is an abysmal baserunner.

Of course, this move is about the bat — particularly as it plays against right-handed pitching. In 1,248 career plate appearances with the platoon advantage, Bour carries an impressive .271/.355/.500 slash. It’s worth noting, too, that while his power fell off last year, and he struck out more than ever, Bour also boosted his walk rate to a career-best 14.6%.

Bour’s late-season swoon in 2018 surely did not help his cause, as he batted a lowly .224/.296/.347 in 54 plate appearances down the stretch for the Phillies after coming over from the Marlins. Of course, he also ran into a market situation that has generally been quite poor for lumbering sluggers.

There could certainly be some nice value here for the Halos, who needed to find a way to increase their offensive productivity as Pujols continues to trail off at this late stage of his career. The opportunity could be a good one for Bour as well, if he’s able to force his way into a major role with a Los Angeles club that is trying to capitalize on its remaining two years of control over superstar Mike Trout.