7:16pm: It’s a one-year deal for Harvey, Feinsand tweets. Fancred’s Jon Heyman tweets that the deal will guarantee Harvey $11MM, and Yahoo’s Jeff Passan tweets that Harvey can earn an additional $3MM worth of incentives. Per Heyman (Twitter link), those incentives are based on games started and kick in at 15 starts before maxing out at 26 starts. Harvey’s deal is still pending a physical.

7:07pm: The Angels have agreed to a deal with free-agent right-hander Matt Harvey, reports Mark Feinsand of MLB.com (via Twitter). Harvey is represented by agent Scott Boras. 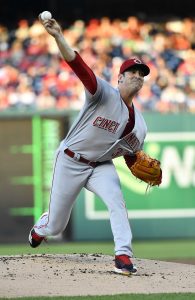 Harvey, 29, will be the first rotation addition for an Angels club that entered the winter in significant need of innings. The 2018 Angels were decimated by injuries, as Garrett Richards, Shohei Ohtani and J.C. Ramirez each underwent Tommy John surgery, while others such as Matt Shoemaker and Nick Tropeano missed substantial time on the disabled list.

Harvey will join lefties Andrew Heaney and Tyler Skaggs as locks to start games for the Halos, but the rest of the rotation is still somewhat unsettled. Tropeano, Jaime Barria, Felix Pena and Dillon Peters are among the other candidates to start for newly hired manager Brad Ausmus, though the names to which the Angels were connected prior to the Harvey agreement perhaps underscore the remaining work that GM Billy Eppler and his staff have ahead.

Jeff Fletcher of the Orange County Register recently reported that the Angels made a two-year, $28MM offer to J.A. Happ before he returned to the Yankees, and USA Today’s Bob Nightengale tweets that the Halos also made a “strong” offer to Patrick Corbin before he signed a whopping $140MM contract with the Nationals. Given those targets and the still-palpable uncertainty in the Angels’ mix of starters, it’s reasonable to expect that they’ll continue pursuing upgrades to the top portion of their starting staff.

The $11MM guarantee for Harvey suggests that the Angels are not only buying Harvey’s turnaround with the Reds in 2018 but anticipating that he can take another step forward. Harvey’s Mets career was torpedoed by Tommy John surgery and the even more ominous thoracic outlet surgery — the lingering effects of which caused the Mets to ultimately cut the cord and flip the right-hander to Cincinnati in exchange for catcher Devin Mesoraco. Harvey gave the Reds 128 innings of 4.50 ERA ball with more encouraging secondary metrics: 7.8 K/9, 2.0 BB/9 and a 42.6 percent ground-ball rate. ERA alternatives like FIP, xFIP and SIERA all pegged Harvey in the low 4.00s.

With the Reds, Harvey saw his average fastball velocity trend up from 92.6 mph in New York to 94.4 mph, and his swinging-strike rate improved from 8.2 percent to 9.9 percent. Neither of those marks are close to Harvey’s peak levels from his “Dark Knight” days, but the positive trends were encouraging enough for the Angels to bet a fairly notable sum that the beleaguered right-hander can hold up over the course of a full season. If that proves to be the case, Harvey could eventually emerge as a candidate to receive a qualifying offer, creating a bit of additional upside for the Halos.

By adding Harvey on an $11MM salary, the Angels push their projected Opening Day payroll up to about $156.2MM — a sum that falls roughly $10MM shy of the $165.8MM Opening Day payroll the team has averaged over the past three seasons. MLBTR contributor Rob Huff recently took a deep dive into the Halos’ payroll, estimating that the team could have as much as $36MM to spend this winter, assuming ownership approval of a slight uptick in payroll. With only Harvey and Justin Bour (one year, $2.5MM) as new additions to the books thus far, there’s certainly room for at least one more notable rotation addition — be it via the free-agent market or via trade.

The pairing of Harvey and the Angels, in some respects, has been more than a decade in the making. The Halos selected Harvey in the third round of the 2007 draft but were unable to sign him despite offering a bonus widely reported to be greater than $1MM in total. That decision, of course, proved to be a good one for Harvey, who was selected seventh overall out of UNC in 2010 and received a considerably heftier $2.5MM bonus from the Mets. Much has changed in the decade-plus since that offer was made, but Harvey is in many ways an upside play, just as he was as a draft prospect in 2007 — albeit a far more expensive one this time around.

For Harvey, the one-year term gives him a further opportunity to distance himself from his disastrous 2016-17 results and re-enter the open market after spending a year in a relatively pitcher-friendly environment. Though he’s moving from the National League to the American League, he’ll also move from one of the game’s most homer-friendly parks to the much more spacious Angel Stadium, which could help him pare back the 1.48 HR/9 he averaged following his trade to Cincinnati. Harvey’s ultimate contract aligns with the annual value we at MLBTR predicted in our Top 50 free agents list, though our rankings projected a two-year term for the former Mets ace. Meanwhile, Harvey’s landing with the Angels won’t do favors to many who participated in MLBTR’s free-agent prediction contest; only 2.9 percent of respondents correctly pegged Harvey to the Halos.