THURSDAY: McCutchen will earn $10MM in 2019, $17MM in 2020, and $20MM in 2021, per Ken Rosenthal of The Athletic (via Twitter). The Phillies, then, were obviously willing to tie up more of their future payroll space on this signing, though it’s hard to gauge just what that portends for the remainder of their offseason.

WEDNESDAY: The Phillies have announced the agreement.

1:46pm: The Phillies have a deal in place with free agent outfielder Andrew McCutchen, according to Matt Gelb of The Athletic (Twitter link). The agreement is still pending a physical.

McCutchen will reportedly receive a three-year, $50MM contract that includes an option for a fourth season. Jim Salisbury of NBC Sports Philly (via Twitter), who first broke the news that the sides were in serious talks, reported the years, with Jon Heyman of Fancred reporting the guarantee and option year (Twitter links). 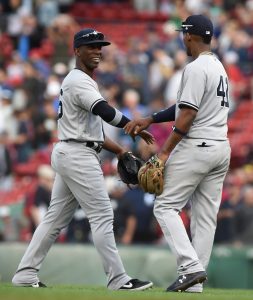 This contract lands above MLBTR’s predicted value for McCutchen, but falls right in line with our expectations of a three-year, $45MM pact. We had ranked Cutch just behind fellow open-market vets A.J. Pollock and Michael Brantley, each of whom remains unsigned at this stage.

For the Phillies, this is a stage-setting move that fills one need and creates quite a few new opportunities. The organization previously dealt for Jean Segura, meaning GM Matt Klentak has now slotted in new corner outfield and shortstop pieces — without moving on top free agents Bryce Harper and Manny Machado. That’s not to say that pursuit of one of those players is out of the question at this point, but the Phils are certainly also now positioned to look elsewhere if they so desire. Certainly, there’s also an argument to be made that these splashes only make it more reasonable for the club to go big on another free agent.

There are innumerable possibilities, still, for the Phils. The team could conceivably deal just about any of its preexisting outfielders. Odubel Herrera, Nick Williams, Aaron Altherr, Dylan Cozens, and Roman Quinn would all hold some degree of appeal elsewhere. Surely some of those players will remain, but the Philadelphia organization will likely seek to rearrange some other pieces to make further moves possible. In addition to several still-youthful position players, top pitching prospect Sixto Sanchez has evidently been talked about in trade chatter, per Ken Rosenthal of The Athletic (Twitter link).

What’s clear, though, is that McCutchen will step into the Philadelphia lineup on most days in 2019. He certainly represents a quality addition, even if he’s no longer the superstar that he was when he was playing with the cross-state Pirates.

Since wrapping up a forgettable 2016 campaign, McCutchen has turned in consecutive solid seasons with the bat. In 1,332 plate appearances over the past two season, he’s slashing a combined .267/.366/.455 with 48 long balls. McCutchen did lag in the power department in 2018, with a year-over-year isolated slugging drop from .207 to .169, but made up for it with a 13.9% walk rate that’s just shy of his career peak.

McCutchen won’t be an option in center for the Phils, though his long experience there could come in handy at times. After a solid debut season in right field last year, he’ll be an upgrade defensively for a club that received atrocious glovework in the outfield last year from Rhys Hoskins, who is moving back to first base. If there’s one area that McCutchen slid most notably, though, it was in the baserunning department. Once a standout, he graded at a putrid -5.0 BsR in 2018. Of course, he also still swiped 14 bags, so perhaps that broader performance is more a blip than an indicator of a significant loss of athleticism.