DECEMBER 4: The deal has now been announced.

12:18pm: The Tigers and left-hander Matt Moore are in agreement on a one-year deal, reports Yahoo’s Jeff Passan (Twitter link). Mark Feinsand of MLB.com had indicated that the two sides were in talks just prior to that report (also via Twitter). Specific parameters aren’t clear, but Feinsand and Passan both suggest Moore would be looking at a guarantee in the range of $2-3MM. The deal is pending a physical. Moore is represented by Sosnick, Cobbe & Karon. 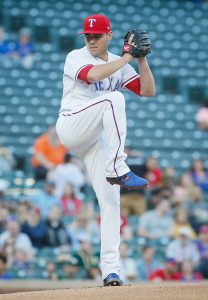 Moore, still just 29, has struggled through a pair of awful seasons and would be a buy-low option for the Detroit rotation. Once considered the best pitching prospect in the game — Baseball America rated Bryce Harper, Moore and Mike Trout the game’s top three overall prospects prior to the 2012 season — Moore’s career came to a screeching halt in 2014 when he underwent Tommy John surgery.

To that point, Moore had amassed 347 big league innings with a 3.53 ERA, 8.8 K/9, 4.3 BB/9 and 0.9 HR/9 all before celebrating his 25th birthday. Moore struggled in his return from the ligament replacement procedure late in the 2015 campaign but gave some reason for optimism when he tossed a career-high 198 1/3 innings of 4.08 ERA ball in 2016. His velocity hadn’t quite returned to its peak levels but was on the upswing, and Moore looked to be on the path to reestablishing himself.

Unfortunately for both Moore and the Giants — who acquired him from the Rays midway through that solid 2016 campaign — the left-hander completely unraveled in 2017. Since Opening Day that season, he’s been clobbered for a 5.99 ERA in 276 1/3 innings of work. Moore has averaged 10.7 hits and 1.5 home runs per nine innings pitched during that time, and his strikeout rate has fallen sharply (7.5 K/9). Over the past two seasons, he ranks 123rd of 125 pitchers in ERA (min. 200 innings), 107th in FIP and 117th in xFIP.

Those struggles won’t matter much to the Tigers, who are hoping to catch lightning in a bottle with the once-vaunted left-hander. Moore will slide into the back of a rotation that will be devoid of any expectations. Michael Fulmer, Jordan Zimmermann, Matthew Boyd and Daniel Norris are the top candidates to join Moore in manager Ron Gardenhire’s rotation next year, though the Detroit organization has an extremely promising wave of starting pitching prospects on the horizon. Matt Manning, Franklin Perez, Beau Burrows and 2018 No. 1 overall draft pick Casey Mize are all rising through the ranks and could soon arrive to give the rebuilding Tigers some hope for years to come.

In the meantime, Detroit will turn to low-risk stopgaps like Moore (and, a year prior, Mike Fiers and Francisco Liriano) in hopes of extracting some quality innings at a reasonable price point. Should they succeed in this instance, Moore will quickly become a trade chip next June or July.