Jan. 8, 8:52 PM: The Brewers have agreed to terms on a split, Major League contract with free-agent righty Jake Petricka, per The Athletic’s Robert Murray (Twitter links). He’ll land a spot on the Brewers’ 40-man roster as part of the deal, which is still pending a physical. Petricka is represented by Platinum Sports. 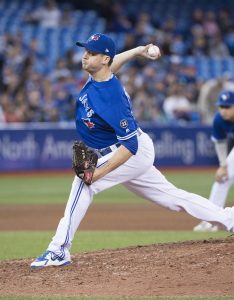 Prior to his time with the Jays, Petricka appeared in parts of five seasons for the ChiSox, though his final two years in Chicago were marred by injury. He pitched to a 3.24 ERA / 3.56 FIP through his first three seasons on the South Side, averaging 6.1 K/9 against 3.8 BB/9 with a ground-ball rate of nearly 64 percent in that time. Petricka, though, required elbow surgery in 2016 and pitched just 33 2/3 innings from 2016-17 combined before last year’s return effort.

Because he only has four years, 157 days of Major League service time, Petricka will be controllable for both the 2019 season and the 2020 season. If he carves out a spot in the Brewers’ bullpen this season, he’ll be arbitration-eligible next winter before becoming a free agent in the 2020-21 offseason.

Petricka does have a minor league option remaining, and by virtue of the split deal he signed, he’ll earn at different rates for time spent in the Majors and the minors. Once his deal is complete, the Brewers will have 39 players on their 40-man roster.