The Giants and free-agent catcher Rene Rivera are in agreement on a minor league contract, reports MLB Network’s Jon Heyman (via Twitter). A client of MDR Sports Management, Rivera will head to Major League Spring Training and compete for reserve role behind Buster Posey, who is currently recovering from hip surgery. 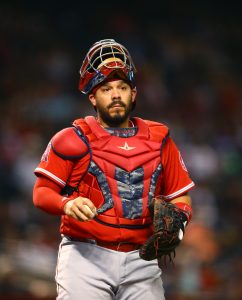 While the veteran Rivera has a bit of pop in his bat (.147 ISO over the past five seasons), he’s known more for his glove than his bat. Rivera boasts an outstanding 37 percent caught-stealing rate in his career and routinely draws excellent framing numbers from Baseball Prospectus.

With Posey on the mend and young Aramis Garcia as the only other primary option on the 40-man roster, catching depth has been a point of emphasis for the Giants this winter. The additions of Rivera and Cameron Rupp (who signed a minor league deal with San Francisco earlier this winter) don’t necessarily rule out the possibility of the Giants adding another backstop option, but they don’t bode well for the prospects of a reunion with Nick Hundley.