11:16am: Joyce’s contract comes with a $1.25MM base salary if he makes the roster, and he can earn an additional $500K based on his number of plate appearances, per Bob Nightengale of USA Today (Twitter link).

8:10am: It’s a minor league pact for Joyce, Joe Noga of Cleveland.com reports. He’ll be in Major League camp with the Indians this spring and look to earn a spot on the Opening Day roster.

7:35am: Free-agent outfielder Matt Joyce announced this morning, via Twitter, that he’s agreed to sign with the Indians. Terms of the deal for the ACES client are not yet known. 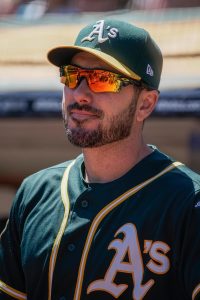 The 34-year-old Joyce will join Cleveland in search of a rebound campaign after struggling through a down season with the A’s in 2018. Last year, in the second season of a two-year deal worth $10MM, Joyce hit just .208/.322/.353 with seven home runs and nine doubles in 246 plate appearances across 83 games. Back troubles hampered him along the way, as he spent nearly two months of the summer on the disabled list due to a lumbar strain.

That said, Joyce is just a year removed from turning in a .243/.335/.473 slash with a career-best 25 homers in 541 plate appearances with Oakland. That type of production would be a welcome sight for an Indians organization whose current outfield mix is expected to feature Greg Allen, Leonys Martin, Tyler Naquin, Jordan Luplow and, if healthy, Bradley Zimmer. Joyce doesn’t exactly bring stability to that uncertain mix, given questions about his own production following last year’s rough results, but if he’s healthy there’s a good chance he’ll be among the club’s more productive options.

Joyce, after all, turned in decidedly above-average offensive output in seven of the eight seasons leading up to 2018 and is a career .250/.351/.451 hitter against right-handed pitching. He’s best deployed in a platoon capacity (.184/.267/.306 career slash against lefties), making him a potentially nice pairing with the right-handed-hitting Luplow.

On the defensive side of the coin, Joyce is limited to the outfield corners, although he did log 16 innings in center for the A’s in a pinch across the past two seasons. He’s generally received average or better marks for his range in both left field and right field, and he has more than 2900 innings of big league experience at both positions.