4:48pm: The Yankees have now announced the agreement.

As has been the case with numerous recent extensions — Max Kepler, Jorge Polanco, Whit Merrifield — Severino’s deal is more front-loaded than conventional extensions. That’s been agreed upon in some cases as a means of protection against a potential work stoppage upon completion of the current CBA in 2021.

10:41am: The Yankees and right-hander Luis Severino have avoided arbitration by agreeing to a multi-year contract, reports Joel Sherman of the New York Post (Twitter links). The new contract is pending a physical. Severino, a client of Rep 1 Baseball, will be guaranteed $40MM over a four-year contract that contains a club option for a fifth season. 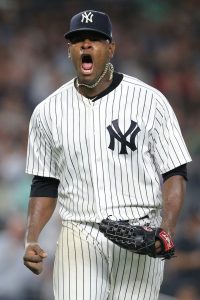 The first major payday comes as an early birthday present for Severino, who’ll turn 25 next Wednesday. It’s a well-earned contract for the Dominican-born righty, who to this point in his career has turned in a 3.51 ERA in 518 innings of work. Over the past two seasons, Severino has been both excellent and consistent, compiling a combined 3.18 ERA with 10.5 K/9, 2.3 BB/9, 0.94 HR/9 and a 46 percent ground-ball rate in 384 2/3 innings of work. Though he’s yet to find success in the postseason spotlight, the Yankees’ strong core should afford Severino ample opportunities to do so over the life of this contract.

Severino had been arbitration-eligible for the first time as a Super Two player, meaning he was already controlled for those four seasons. However, the new contract arrangement affords the team with control over what would have been the right-hander’s first season of free agency.

Severino’s camp filed for a $5.25MM salary against the Yankees’ submission of $4.4MM (as can be seen in MLBTR’s Arbitration Tracker), so this contract promises him what would be at least an additional $35.6MM for his three subsequent arbitration seasons (or an additional $34.75MM in the scenario where he had won that case). Heading into arbitration, Severino and righty Aaron Nola were viewed as similar cases, and the similarity between the pair of extensions they signed this week — Nola inked a four-year, $45MM pact on Wednesday — further speak to the comparable nature of their cases.

The most notable difference between the pair of right-handers, though, was that Nola had already surpassed three year of service, while Severino was a Super Two. So while the Phillies gained control over an additional two seasons of Nola (in exchange for an additional $5MM in guarantees), the Yankees are buying out just one free-agent year. Severino will now hit the open market in advance of his age-30 season.

As was the case with the Nola deal, there’s some risk baked into this new pact for Severino. While one can hardly fault him from wanting to secure a first life-altering contract, Severino is also forgoing the opportunity to reach free agency heading into his age-29 campaign — an age at which Patrick Corbin received a six-year, $140MM contract. Granted, he’s only pushing the free-agent clock back by one season, but teams have shown an increased reluctance to pay a premium as players enter their early and mid-30s. It’s also quite possible that with at least $4.4MM (and potentially as much as $5.25MM) already banked, Severino could’ve handily topped $40MM in total earnings over the course of his four arbitration seasons.

Of course, those risks apply to virtually any early-career extension, and Severino’s new arrangement provides him with a nice safety net in the event that he incurs a serious injury or unexpected decline — either of which could radically alter his earning capacity in a scenario where he’d opted to go year-to-year through the arbitration process.

Looking at historical precedent, the contract, like Nola’s, is somewhat of a half measure. Severino isn’t fully betting on himself, surrendering his earliest opportunity at free agency in exchange for an immediate payday, but his camp also opted not to go for broke in terms of establishing a new precedent for Super Two starting pitcher extensions.

As shown in MLBTR’s Extension Tracker, Gio Gonzalez’s now seven-year-old extension with the Nationals (five years, $42MM and two club options) still stands out as the largest contract ever signed by a pitcher with between two and three years of service time. Severino did top Corey Kluber’s $38.5MM deal with the Indians by a slight margin, but Kluber wasn’t Super Two eligible and was four years older at that point than Severino is now. Of course, both Gonzalez and Kluber agreed to five-year guarantees with multiple club options as part of those contracts, whereas Severino only surrendered five years of control in total. With that in mind, it’s likely that the Yankees would have wanted (at least) an additional year of control over Severino in order to firmly set a new precedent — something to which Severino’s camp may simply not have been amenable.

Historical context aside, Severino’s contract will push the Yankees’ 2019 payroll to just north of $202MM and come with a $10MM hit on their luxury tax payroll, which is calculated by contracts’ average annual value as opposed to their year-to-year salaries. The Severino extension, then, brings New York’s 2019 luxury tax ledger to a bit more than $222MM, per Roster Resource’s Jason Martinez, which checks in about $16MM north of the $206MM luxury threshold. Looking beyond the current season, the Yankees now have nearly $146MM committed to the 2020 payroll and more than $161MM on their 2020 luxury ledger.