4:46pm: The move is official. The Phillies designated righty Yacksel Rios to open a 40-man spot.

3:51pm: The Phillies have reportedly struck a deal to acquire veteran lefty Jason Vargas from the Mets. Catcher Austin Bossart is going to the New York organization in the swap. The Mets will cover the larger portion of the remaining contractual obligation to Vargas, ultimately saving $2MM. 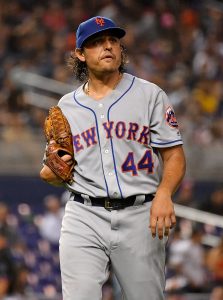 This long-anticipated trade of Vargas clears a rotation spot for just-acquired righty Marcus Stroman. Though Vargas is far senior to Stroman in age and MLB service, they’re in similar contract situations. The former is earning $8MM this year with a $8MM club option. The latter is taking down a $7.4MM salary in 2019 and stands to earn a nice raise on that amount in the offseason, when he’ll go through the arbitration process for the final time. Viewed in the aggregate, the Mets will still end up taking on added salary (and giving up prospect capital), though they did get $1.5MM in salary relief as part of the Stroman swap. The New York org will remain on the hook for what’s left of Vargas’s remaining 2019 salary along with a $250K assignment bonus. The Phillies will be responsible for a $2MM buyout on the option.

It’s not surprising to see Vargas on the move. It’s mostly a salary-saving transaction, designed to help partially offset the new obligations to Stroman. The 26-year-old Bossart won’t really make up for the prospects sent to the Blue Jays. He’s in the midst of a rough campaign, his second at the Double-A level. In his 236 trips to the plate, he’s slashing just .195/.303/.335 with seven home runs.

The more interesting question for the Mets is whether any of the club’s other starters will end up following Vargas out the door. While there has never been any indication that the club is considering offers on Jacob deGrom, it is said to be interesting in moving Zack Wheeler and/or Noah Syndergaard. The latter two starters are indeed still on the block, Mike Puma of the New York Post tweets.

There are questions, too, from the Phillies’ perspective. It seems fair to assume that Vargas will step into the rotation, though it’s not clear where the opening will come from. And it remains to be seen whether the club will also pursue other pitching upgrades.

Vargas, 36, won’t exactly be a marquee addition for the Phils, but he ought to help hold firm up the staff down the stretch. The soft-tossing southpaw has somehow managed to keep opposing hitters off balance despite averaging less than 85 mph with his fastball. He has bounced back from a terrible start to the season and steadily delivered solid work. He carries a 4.01 ERA through 94 1/3 frames, with 7.7 K/9 against 3.7 BB/9.

Andy Martino of SNY.tv first reported that a deal involving Vargas was close (via Twitter). ESPN.com’s Jeff Passan reported that the Phillies were the acquiring team (Twitter link). Joel Sherman of the New York Post (via Twitter) and Jon Heyman of MLB Network (in a tweet) reported on the return. Ken Rosenthal of The Athletic tweeted that the Mets would be covering some of the remaining cost, with Sherman tweeting the financial details.